4 January 2015: Well, here we are in January and another year is in the books. I hope it was good for all of you and my wish is that 2015 will be even better! I thought we mark the new year with an event that led to a whole industry and, indeed, a new class of ship. It all began on January 5th 1818.

In the autumn of 1817, four New York shipping men got together and founded what they called the American Black Ball Line. Their names were: Isaac Wright, Francis Thompson, Jeremiah Thompson, and Benjamin Marshall. They decided that what the world needed was fast regular cargo and passenger service between New York and England. While cargo vessels heretofore had been slow, heavy, and without a schedule (they sailed when they had a full cargo), these four chaps gambled that people would welcome a faster - much faster - service that ran on a regular schedule, carried valuable cargo, and some passengers in luxury and others in a lower fare accommodation called "steerage."

They found or built four ships; fast, hollow-bowed, tall rigged with limited space for luxury passengers and set two of them in  Liverpool England and two in New York. They advertised that these ships would leave on a specific date each month. 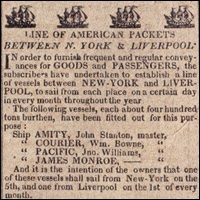 On 5th January, 1818, the first of these left New York in a raging blizzard; she was the James Monroe, and her overseas counterpart left Liverpool on the 1st of the same month. Monroe carried eight passengers and a full hold of cargo. 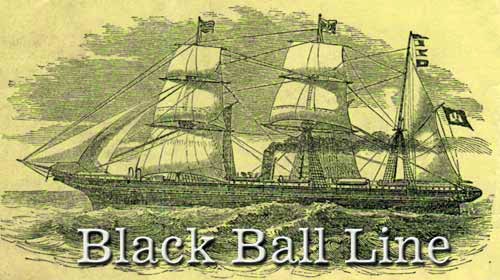 While there were, at the time, other ships sailing the same route that were more luxurious, larger, and equally fast, they did not offer a regular sailing date every month, irrespective of their loading. This quickly became a very desirable advantage, and the Black Ball Line soon became profitable and enjoyed excellent growth. Their distinguishing feature was the large black ball painted on their fore tops'l, and their flag, a crimson swallow tail featured a black ball in the center. 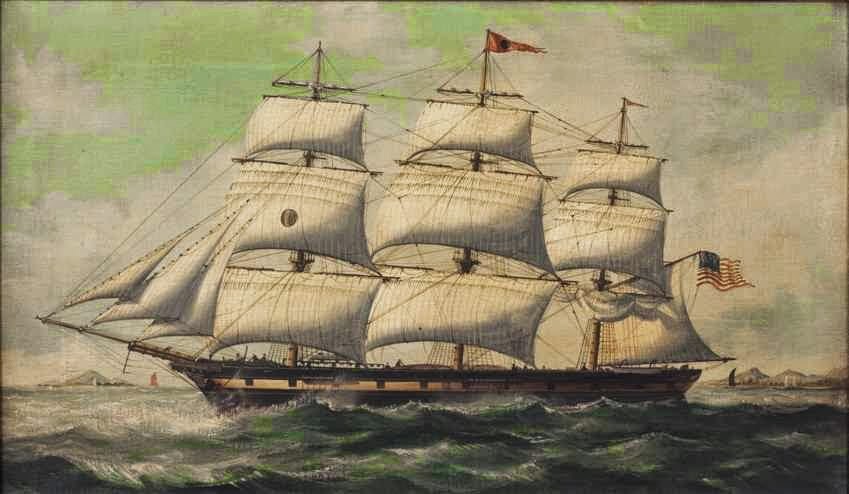 As the packet trade matured, races across the Atlantic between competing lines sprung up, sometimes encouraging some serious wagering. One of the first took place in 1837, New York to Liverpool, between the Black Baller Columbus and the Dramatic Line's Sheridan. A pot of $10,000 awaited the winner. Leaving New York on 2 February, Columbus handily won the race and, of course the money, in 16 days. Sheridan finished two days later.
The New York waterfront, especially along the East River quickly grew into a prime seaport, with competing lines owning their own docks and warehouses along the waterfront. 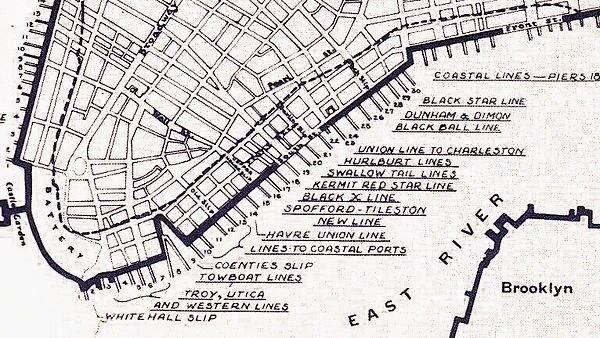 The packet ships soon gave way to the graceful, extreme clippers well known today as the subject of many maritime paintings, both contemporary and modern. Ships such as Flying Cloud, Sea Witch, Fair American, and Cutty Sark sailed the highly lucrative China Route, carrying tea from China to the western world. Some set records for speedy passages that stand today (for single hulled vessels). As a matter of interest, Cutty Sark, one of the last clippers built (she's also built of iron), remains afloat in Greenwich England, near the National Maritime Museum in that city.