LARGEST FISHES IN THE SEA

4 February 2015: In the waters around my winter home - some of the best SCUBA diving in the world, by the way - we get the occasional critter that doesn't generally visit us. We have seen Manta Rays, normally inhabitants of the Pacific - we have Sting Rays - who somehow found their way to the Caribbean. And once in a while, we get a visit from one or two of the largest fish in the ocean: the Whale Shark. I know, whales, per se, aren't fish; they are mammals, but these gentle giants ARE in fact, fishes.

Among other places in the world with warm waters, they migrate in the far reaches of the Western Caribbean - off Mexico - and there are dive operations that will take snorkelers out to swim with them. They do not allow SCUBA as the bubbles will frequently scare these huge fish away, denying others the chance to swim with them, and disrupting their migratory pattern. They are called sharks, but unlike their cousins, they eat only plankton, sucking in great gouts of it as they swim through the seas. Yep, just like the Hump Back whale - a true whale and a mammal. Their name derives from the fact that while they are indeed fish, they often attain the size of a whale and they operate as a "filter feeder" just like a baleen whale.

They don't dive like whales do to prodigious depths, preferring to remain near the surface (relatively), though in a pinch these guys can get down to over 4,000 feet. Their mouths are huge, nearly 4 feet wide and contain over 300 very small teeth and 10 filter pads. Their overall size is about 32 feet long and they can weigh 10 tons! 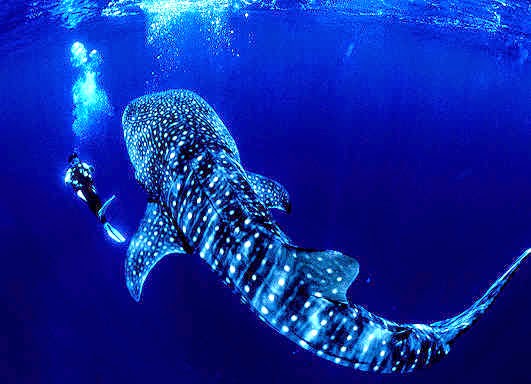 While I have not personally swum with these critters, I have friends who actually went to a little town in Mexico just for that purpose and the report was "AMAZING!" "FANTASTIC" and similar that came so fast they were tripping over one another. These fish can apparently live for up to 70 years and the females give birth to live babies (called pups - don't ask why, I have no idea!) at a rate of 300 over a prolonged period. The female will retain eggs and sperm inside, releasing the "pups" in steady steam over a long time!
﻿
﻿
So, last week, here in Grand Cayman, we had several sightings of whale sharks off the west side of the island (nearest to Central America) which might mean that some of these guys will stick around for a while. I hope so. I have only seen one from the surface. I am given to believe that there are either two or four of them living in an aquarium in Atlanta GA which, given their size, seems a bit odd and certainly confining for these enormous fish, used to having the while ocean as a habitat. 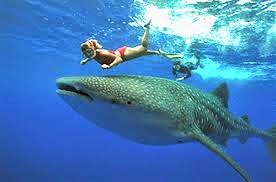 That's it for now, friends. See you soon.
Fair Winds,
Old Salt
Posted by Maritime Maunder at 6:48 AM