10 January, 2015: The day before yesterday, 8 January, was the anniversary of the burial of Vice Admiral of the White, Horatio Lord Nelson at St. Paul's Cathedral in London. 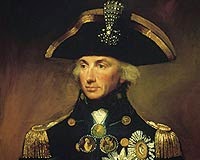 That would have been in 1806. I am sure you all recall that Admiral Nelson fell at the hands of a French sharp shooter as he sailed HMS Victory into the fray at the Battle of Trafalgar and died shortly thereafter in the arms of his flagship's captain Hardy. That date - I know, you all know that date - was 21 October 1805.
So they bring him back to England, pickled, as it were, in a barrel of rum (and yes, there are countless anecdotes about that and more than a couple of drinks (rum, naturally) such as "Nelson's Blood" and the like. The Royals and the Parliament are so upset by the loss of their heroic Admiral Nelson that they organize a state funeral for him. Normally, one would have to be at least a duke to qualify for that. So, really a big deal! His body lay in state at the Royal Naval Hospital in Greenwich, and then his casket (which offered a silhouette reminiscent of a sailing ship) was placed on a barge. The barge had been built for the use of Charles II. (see what I mean about this being a big deal) The casket was under a black canopy surmounted by black ostrich feathers.


60 ships escorted the barge on its melancholy voyage from Greenwich to Whitehall - it took all day.
The next day, the casket was placed on a funeral carriage and taken in procession to St. Paul's Cathedral. The "hearse" was pretty fancy, even for then! 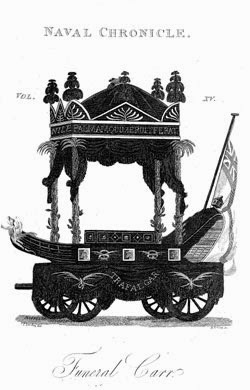 People lined the streets along the route, which had been previously published as a memorial to Nelson. One chap, obviously in attendance, wrote to friend that "the sound of all the men removing their hats as the carriage went by sounded like a wave breaking on the shore." He also noted that the procession was so long, that when the head of it reached St. Paul's, the tail had yet to leave the palace of Whitehall!


At the cathedral, 12 of Nelson's sailors lifted the coffin from the carriage and carried it in, while 6 admirals held a canopy of black velvet over it. French and Spanish flags, captured at Trafalgar hung from the dome of the church. 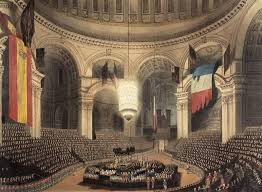 The 4 hour service was lit by a huge lantern, specially constructed for the event which contained 130 individual lamps. Thousands of mourners, each having purchased a ticket, viewed the ceremony, which offered the music of some of the world's finest composers: Handel, Purcell, Arne, and Croft.

While Admiral Nelson's remains still lie in St, Paul's, but perhaps more visible to any who look, is the tower, Nelson's Column, in Trafalgar Square. 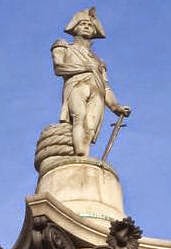 They really did it right, for their heroes, back then, didn't they!
Fair Winds,
Old Salt﻿

Posted by Maritime Maunder at 2:10 PM