13 November: With Veterans' Day 2014 barely in the record books, and while we are still in a somewhat nostalgic frame of mind, I thought that since today, 13 November, is the anniversary of the dedication/opening of "the Wall," it would be appropriate to give you a small bit of history on it, but mostly to offer some images of that very somber and meaningful monument.

The Vietnam Veterans Memorial was designed by Maya Lin, a Yale undergraduate, who won an open competition with her design. When it was first opened, many criticized its stark simplicity, but most have come to feel the significance of the Memorial over the years. It was dedicated and opened to the public on 13 November 1982.
Upon opening, it contained the names of over 57,800 servicemen and women who made the ultimate sacrifice and as more were discovered, they were added. What is interesting is that the names are inscribed in the order of their deaths, not by rank or alphabetical order. The names are not carved, but computer engraved in the black, Indian granite. And there are no ranks listed. 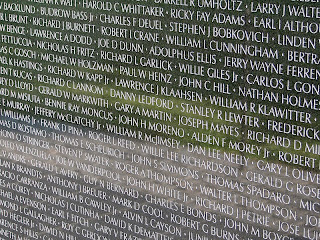 After a bit of outcry from the public, it was determined to add a statue depicting men in a realistic pose, and the The Three Servicemen memorial opened, facing the Wall, two years later. it was designed by the third place winner in the design competition. In the proper light, the reflection of the statue in the Wall is quite stirring. 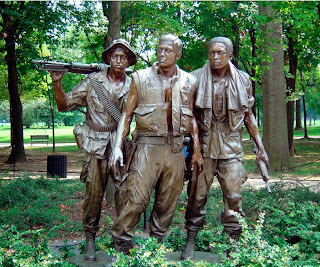 And, in recognition of the 186,000 women who served in that theater, another statue,
The Women's Memorial, was dedicated in 1993. 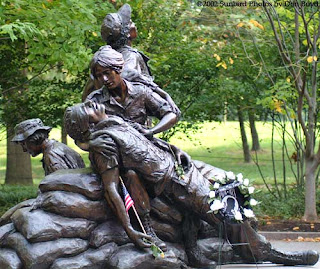 A few other images that pretty well give the flavor of this emotional tribute to the guys and gals who didn't get home. 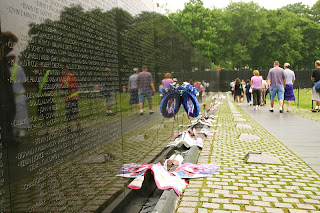 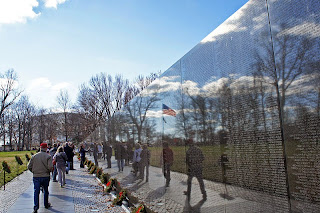 "We remember their sacrifice." Quote on the Wall