10 November 2014: On this date on 1775 the Continental Congress passed a resolution calling for "two battalions of Marines." It was drafted by John Adams and adopted in Philadelphia PA and created the "Continental Marines" who would serve henceforth on land and at sea.
The first landing performed by the new Marine Corps occurred on the island of New Providence, held by the British in 1776. Captain Samuel Nicholas, the first commissioned officer in the Marines would become the first commandant of Marines. The landing's mission was to take control of the British magazine on Nassau and return as much of the munition to the needy Colonial Army. Following the successful conclusion of the War for Independence, the Marines were disbanded when the Navy was demobilized.

However, with the burgeoning conflict with Revolutionary France in 1798, The U.S. Congress reestablished the Navy and two months later, President John Adams signed the bill naming the U.S. Marine Corps as a permanent military force, under the jurisdiction of the navy - something that rankles the Marines to this day!


This premier fighting force saw action in the Barbary Wars and every one since. In fact, the official sword carried by Marine Officers is the Mameluke sword fashioned after the North African sword presented to Lt. Presley O'Banion who trekked across miles of desert to help liberate Tripoli with a ragtag hoard of North African fighters. The Marine Corps Hymn celebrates "...the shores of Tripoli" along with the "Halls of Montezuma," a reference to the Mexican War where the Marines
distinguished themselves yet again. 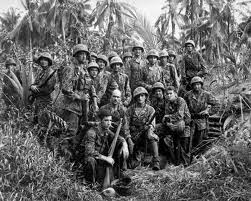 The Marines are generally the first ashore in a hostile country and have executed over 300 contested landings. The WWII Pacific theater was almost entirely dominated the Corps - the names of their conquests legendary: Iwo Jima, Guadalcanal, Tarawa, Okinawa to name only a few. Their presence in Viet Nam was keenly felt by all and of course, the Marines have seen countless months of combat in both Iraq and Afghanistan.

There are currently over 200,000 active duty and reserve Marines - truly a "few good men (and women)" stationed all over the world. Bases exist at Camp LeJeune, NC, Camp Pendleton, CA, and Okinawa. Each can launch an expeditionary unit anywhere in the world on two weeks notice. These units are self-sufficient with tanks, aircraft, and artillery. 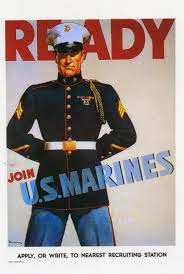