3 October 2021: October already! Where does the time go?! Hard to believe summer is in our wake and winter looms just over the horizon. And still we continue to deal with the tragedy (in so many ways) of the pandemic across the globe. Will this hateful problem ever go away!

On a more positive note, here's an interesting look at the future of cargo transport - at least as it relates to the sea trades. And about time, we think! From a source in the United Kingdom:

Imagine that the cup of coffee in your hand was transported all the way from Colombia not on a giant, polluting container ship, but by a sturdy sailing vessel using only wind power.

That’s the vision of TransOceanic Wind Transport (TOWT), a small cargo company based in France which is now scaling up to transport tens of thousands of tonnes per year.

Founded in 2011, TOWT has already transported over 1,000 tonnes of cargo across the ocean using small sailing ships. Now, the company is in the process of building four larger sail ships, which will travel on four maritime routes between Europe and destinations including New York, Guadeloupe, Brazil and the Ivory Coast. The maiden voyage of the first ship is planned for late 2022.

“Wind is abundant, it's powerful, it's now predictable,” says Guillaume Le Grand, co-founder and chief executive of TOWT. “And sail is the best way to actually harness it and to move heavy haul over long distances.”

Each ship will be able to carry 1,100 tonnes of cargo, says Le Grand, around ten times the capacity of the current largest sail cargo boats in operation. They will have 700-square-metre sails, with diesel engines only for occasional use when needed. TOWT claims they will reduce emissions by 90 per cent compared to conventional cargo ships. 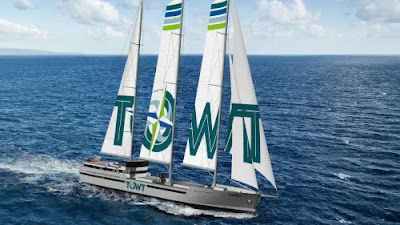 Every year, the conventional shipping industry pours out some 600 to 700 million tonnes of carbon dioxide into the atmosphere – around the same as Germany and about 2-3 per cent of global CO2 emissions. But the sector is a tricky one to decarbonise. Electric engines are not powerful enough to get ships across oceans, while alternative green fuels such as hydrogen or biofuels are not yet produced remotely near the scale needed. “We have got the only solution that is real, that is efficient,” says Le Grand. “The only energy at sea is the wind.”

The firm already has orders worth over 100 million euros from some 30 companies who want to transport everything from cocoa and coffee to wine and champagne – and are willing to pay that bit extra to be able to tell their customers the products arrived via a low-carbon ship. “We always tell the public by a little label and a number how the goods have been transferred,” says Diana Mesa, co-founder of TOWT.

Each ship also has space for 12 passengers who will travel alongside the seven crew members and provide another source of income for the company. “It's good, because we know that every passenger will be an ambassador of what we do after they've crossed,” says Guillaume. One coffee roaster even wants to put a Willy Wonka-style golden ticket for a voyage in one of its coffee bags. ”Everyone will know that if you buy that coffee, you might one day end up with a ticket to cross the ocean and back to Colombia where the coffee comes from.”

TOWT is not the only company building larger sail cargo ships than are currently on the water. Costa Rica-based SailCargo is close to finishing its first wooden sailing ship which next year will carry some 250 tonnes of goods between North and South America using only wind power and an electric engine.

Wind should be a big part of decarbonising shipping, says Aoife O’Leary, director of international shipping at the non-profit Environmental Defense Fund (EDF). “For every nautical mile you can sail with wind, you're saving yourself on a ridiculously expensive alternative fuel.”

However, 100 per cent sailing ships may play more of a niche role, she says, with more widespread changes in the use of wind technologies seen on conventional cargo ships. “There are more and more wind technologies coming out all the time for different ship types,” she says. “It does seem like a very, very obvious propulsion technique.”

As a matter of interest, small valuable cargo like perfume, wine, linens, gloves, and some leather goods were transported from Europe during the War of 1812 in small, agile, and very quick tops'l schooners whose sister ships were put into service as privateers against British shipping. These transports vessels were adept at slipping through blockades and outrunning most everything that went after them. Today's reproduction ships, Pride of Baltimore II and Lynx are living examples of these tops'l schooners (the former was a privateer while Lynx was a "letter of marque" trader, licensed to carry cargo and, if opportunity presented, take the occasion prize. Seems like everything old is new again!

I will be interesting to see how viable these new windships will prove to be.

Posted by Maritime Maunder at 11:46 AM