17 October 2021: The floating island the size of Rhode Island drifting around in the Pacific has long presented a major problem both to the environment and shipping. Various attempts have been made to remove it, but the problem is just too immense to fix easily or quickly. Finally, a solution and system has been developed to address this issue. From Newatlas.com:

Ocean Cleanup's supersized system proves its worth with "massive" haul

Back in August, the Ocean Cleanup Project returned to the waters of the Great Pacific Garbage Patch with a redesigned trash-collecting system that was its largest yet. This upsized approach appears to be paying some dividends, with System 002's final phase of testing hailed a success and marked by a "massive" haul of plastic waste.

The Ocean Cleanup Project first popped up back in 2013 with grand plans to clean plastic from the oceans using massive floating barriers, and the system has undergone a number of reinventions since.

The System 002, nicknamed Jenny, that was launched in August marked a significant departure from previous iterations, as it ditched a passive design in favor of active propulsion. This meant rather than relying on floating system that moved with the wind and the motion in the ocean, the horseshoe-shaped Jenny would be towed along by crewed vessels at either end. 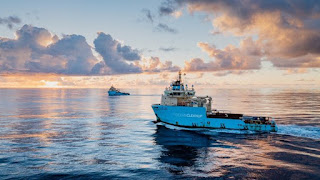 The idea was to move Jenny through the Great Pacific Garbage Patch at a steady speed of 1.5 knots, funneling plastic waste into a retention zone at the far end. With a length of 800 meters (2,640 ft), Jenny is also the biggest system deployed by the Ocean Cleanup Project, and its first large-scale system.

After towing Jenny out to the patch in mid-August, the Ocean Cleanup team kicked off a trial regime involving more than 70 separate tests to see if it is up to the job. The most recent of these took the form of a "full duration" test, designed to completely fill up Jenny's barriers over the course of six weeks. This final test of the system was completed over the weekend, and to great success, according to the team. 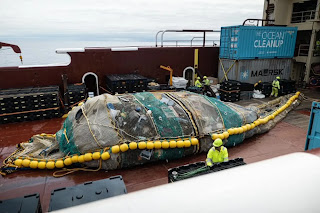 "It all worked!!! Massive load. We’ll try to get the footage to land ASAP to share," tweeted Ocean Cleanup CEO Boyan Slat.

The team is still processing its catch so we can expect more information to be forthcoming on how much Jenny is capable of cleaning, but one thing is clear it will take many Jennies to put a dent in the issue. Millions of metric tons of plastic waste wash into the ocean each year, and many have doubts about the capacity of trash-catching barriers to tackle the problem, and whether these efforts might do more harm than good.

For its part, the Ocean Cleanup crew is well aware of this, and is simultaneously endeavoring to prevent plastic waste entering the ocean through a river-based collection system called "The Interceptor." It still sees the accumulated waste in the ocean as a major problem that needs solving, as the longer it remains swirling about in the seas the more of it breaks down into problematic microplastics that are difficult to track and pose all sorts of problems to the environment.

Pretty good job, we think. And while we are on the subject of "cleaning up" some of you may recall we have posted several pieces in the past on the Golden Ray disaster in St Simons Sound, Georgia (USA) and the efforts spanning nearly 2 years to clean that mess up. Well, dear readers, it's done. They have completed the removal and now all that remains is the clean up of oil and other residue along the shore line. But the ship, cut up and carried off, is gone!

Posted by Maritime Maunder at 1:34 PM