25 August 2020: Well, here we are: off and running for our 7th year of providing maritime trivia and other maundering ,following a short pause while your 'umble scribe underwent a bit of "knife and fork" work toward the end of last week. What's that you say? Are you all right now? Well, getting better daily and finally felt up to tackling the computer and finding something of interest. Thanks for asking!
Today's bit comes to us from both Fox news and the British Daily Mail (both on line) and seems consistent with some of the writings we have seen lately regarding wrecks and WWII lost ships. And there's a pretty neat video along with it also. Enjoy!
~~~~~~~~~~~~~~~~~~~~


A German U-boat that sank off the British coast during World War II has been captured on camera in remarkable images.


The pictures were taken by diving contractor Dive Newquay, which took a group of divers to see the remains of U-1021, British news agency SWNS reports. The vessel lies 9 nautical miles off the coast of Cornwall. 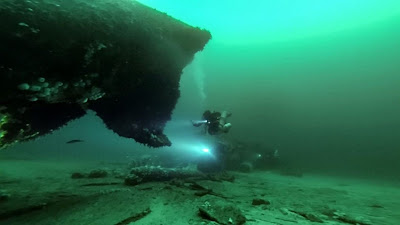 "The U1021 lies about nine nautical miles from Newquay Harbour and sits in 55m [180 feet] of water," a Dive Newquay spokesperson told the news outlet. "Dives of this depth are considered technical, which require special planning and different breathing gasses."


"It was the best visibility we have ever seen on the wreck," the spokesperson added of the "truly epic dive."
The wreck is near two other U-boats that also sank during the war.
Four divers took part in the 85-minute dive, of which 30 were spent at the bottom, the spokesperson added.
U-1021 served with 31st U-boat Flotilla before disappearing in March 1945. 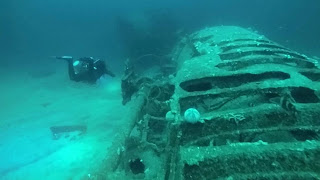 Several other World War II submarines have been found in recent memory, including several German U-boats.
In February 2017, U-581 was found at a depth of 2,953 feet near the south coast of Pico Island in the Atlantic Ocean off the Azores.
In April 2018, Danish researchers discovered the U-3523 off the coast of Denmark’s northernmost town of Skagen, roughly 403 feet below sea level.

Click here for the video: video of sunken German U Boat

That's it for now, friends. Stay safe and wear your masks!


Posted by Maritime Maunder at 9:30 AM