7 July 2019: A couple of weeks ago, underwater archeologists who had been searching the York River in Virginia hit paydirt: they found the remnants of a Revolutionary War ship, likely English, from the Battle of The Virginia Capes. History buffs will recall this was the critical sea battle of the war, where the French fleet, under Admiral DeGrasse stopped the British fleet from resupplying Cornwallis at Yorktown. George Washington had held the British army under siege at Yorktown and with their resupply and escape cut off, Cornwallis had little choice but to surrender, thus essentially ending the Revolutionary War - at least the major fighting part of it. Here is the story of this amazing find in the York River:
~~~~~~~~~~~~~~~~~~~

Researchers scouting the York River for Revolutionary War shipwrecks believe they’ve found another one — complete with cannons, "a historic diver's dream," said one of the explorers.
Like most of the 10 wrecks previously discovered, this one is entombed in the muck, a ghostly witness to America's fight for freedom, shrouded with a mound of silt and oyster shells.
The wrecks are a reminder that Yorktown played a pivotal role in our country's first chapter.
Sure, Philadelphia can claim the Declaration of Independence, adopted there on July 4, 1776. 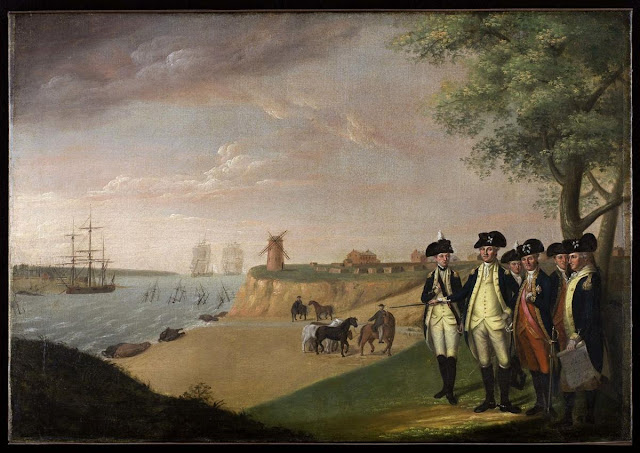 But this small town on the York River was the scene of the bloody bookend, the last major battle of the war. The wrecks are the remnants of Lord Charles Cornwallis’ fleet, sunk in 1781 during the Siege of Yorktown, a 25,000-man slugfest that finally broke the back of British rule in the colonies.
As many as 40 British ships were lost here, forgotten for hundreds of years. Explorations in the 20th century located the bulk of the known sites, leading the area to become the first underwater listing on the National Register of Historic Places.


Diver Bill Waldrop was the first diver to find a cannon on a newly discovered site — the 11th wreck located.
But with no comprehensive surveys done in decades, it’s been a long time since any new discoveries have been made, especially ones including cannon.
“It’s just incredible,” said Ryan Johnston, one of the partners in JRS Explorations, a Yorktown-based outfit created to try to map and preserve what’s left of the ships.
Only a few of the known wrecks have yielded any kind of cannon. When these were found June 19, Johnston said, the team could only think "you're kidding me."
The wreck, tentatively identified as the remains of a troop transport named the Shipwright, was first detected when sensors scanning the bottom indicated a likely target in about 23 feet of water near the Gloucester side of the river.
Divers descended two weeks ago. Feeling their way along in near-zero visibility, probing into the river bed, they discovered a partially-buried iron cannon measuring more than 7-feet long.
"We kind of stumbled into it," Johnston said. "It’s so encrusted you can’t even put your hand in the muzzle.”

They found another, and possibly a third buried even deeper. They also detected what they think is the hull of the ship, resting a foot or more down in the mud. 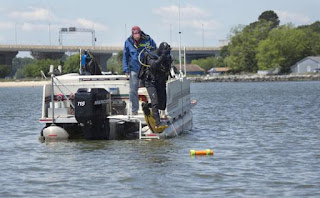 An excavation, which must wait for the proper permits and conservation plans, is the only way to be certain of the ship’s identity. But every wreck in the river tells its own piece of the Yorktown story. Several clues point toward this one being the Shipwright.

Old records provide a decent accounting of Cornwallis’ vessels, not to mention the battle that consumed them. Dozens were intentionally scuttled by the British commander to keep them out of enemy hands or blockade the harbor. Three are known to have gone up in flames.

The most famous of those: Cornwallis’s largest warship, the HMS Charon. French batteries firing heated shot hit the Charon, setting it ablaze. The blow wasn't as bad as it sounds, since most of the Charon's 44 guns had already been moved ashore to support the ground battle. But when the fire burned through the ship's anchor rope, it drifted into two large transport vessels, compounding the loss. All three burned to their waterlines.
The Charon, one of the first wrecks ever located in the York, was excavated in the 1930s. The site of the other burned ship has also been long known.
This wreck is close enough to those two to be the third, the Shipwright. 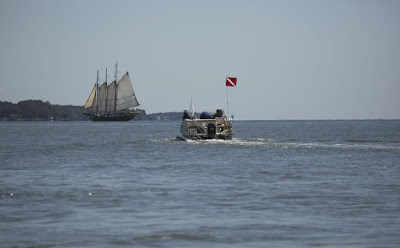 Transport vessels were known to carry a few cannon for self-defense.
The clincher: Divers brought up a chunk of charred-looking wood.
“It literally still smells like fire, believe it or not,” Johnston said.
The Yorktown shipwrecks belong to the state. The quest to save them is largely volunteer. New finds provide priceless fuel.
"It's an inspiration for the crew," Johnston said. "Geez, we'd be happy to find even one cannon. This is huge."
~~~~~~~~~~~~~~~

Once the research team has received the necessary permits to excavate and raise and conserve some of the artifacts, they will more likely be able to more certainly identify the find, and should Maritime Maunder learn of it, we will bring you up to date.