22 July 2019:  In 1947 Thor Heyerdahl, the Norwegian adventurer and ethnographer with a background in zoology, botany, and geography became notable for his Kon-Tiki expedition , in which he sailed 8,000 km across the Pacific Ocean in a hand-built raft from South America to the Tuamotu Islands. And now, 72 years later, it's been done again, albeit with a somewhat more elaborate vessel. With thanks to ExplorersWeb for this info:
~~~~~~~~~~~~~~ 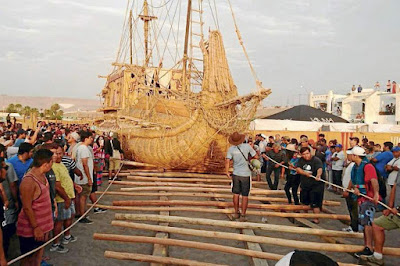 After more than three months and 9,200km of sailing, Viracocha III has reached Tahiti, in French Polynesia. The eight-person crew launched their 18m reed raft from Arica, Chile and spent 86 days drifting west across the Pacific Ocean before their first land sighting: Tatakoto, a 14km-long, isolated atoll in the Tuamotu Islands. From there, it took them another three weeks and over 1,000km to reach Tahiti.

Their journey wants to demonstrate the capabilities of reed rafts and to show how ancient South American mariners may have used them to migrate across the Pacific. They spent three years and used 2.5 million freshwater totora reeds from Bolivia and Peru — along with 10 Aymara reed raft experts from Lake Titicaca — to construct their vessel. Ahead of them lies three more months and 10,000km through the Cook Islands, Tonga and Fiji before their end goal of Sydney, Australia.
~~~~~~~~~~~~~~

For comparison, here is Heyerdahl's KonTiki: 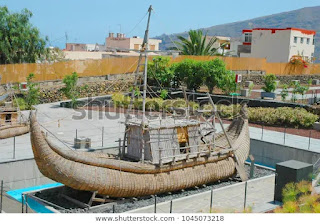 I am sure we will see more on this epic voyage, especially as they arrive in Sydney Australia. Quite an undertaking!

Posted by Maritime Maunder at 1:46 PM