15 July 2019: After over five years of fighting - both with politicians and locals, the Mallows Bay "graveyard" has finally been declared a marine sanctuary. And if you are nearby to the upper Potomac River in Maryland, it is worth a visit to see it. See below:
~~~~~~~~~~~~

A century ago, dozens of shipyards across the United States constructed a fleet of wooden steamships to aid the fight against Germany during World War I. Today, ospreys nest on the boats, and bats breed in the hull. More than 100 of these historic vessels survive, serving as a half-submerged home for fish, beavers, waterfowl, and vegetation along a stretch of the Potomac River next to Mallows Bay, Maryland. 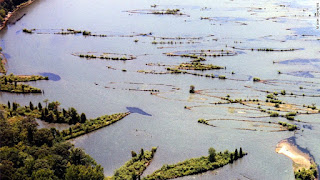 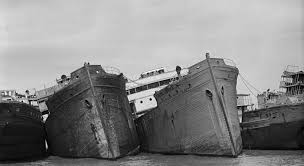 Plagued by mechanical and construction issues, none of the ships actually made it to Europe during the war. After, most of them were moved along the Potomac to be salvaged by a local company that later abandoned them in Mallows Bay. 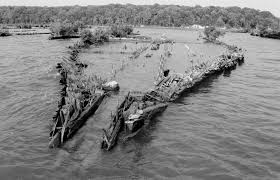 Despite their place on the sidelines, the ships “reflected the massive national wartime effort that drove the expansion and economic development of communities and related maritime service industries,” NOAA noted in the sanctuary. Public officials and conservationists in Maryland first nominated the site in 2014, hoping to encourage tourism, education initiatives, and spur new jobs. It also wanted to increase monitoring of the site and acquire federal funds. There was at the time from locals who made their living from the Potomac and feared additional regulations would hurt their business, and the nomination stalled on the governor’s desk.


Mallows Bay is already a popular tourist spot, where visitors can kayak through shipwrecks and observe an array of wildlife, including bald eagles and osprey. 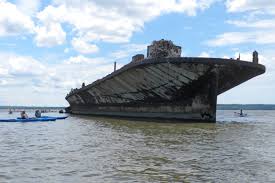 The National Marine Sanctuary System, encompassing 13 sanctuaries and two marine national monuments, protects 430 shipwrecks and sunken aircraft. The Thunder Bay National Marine Sanctuary and Underwater Preserve was the last site to get a NOAA designation in 2000. After, Congress paused future sanctuaries until NOAA could determine it had the resources to manage existing inventory. The Mallows Bay-Potomac River site won’t become official until a 45-day period, during which the House and Senate can hold hearings about the designation.
~~~~~~~~~~~~~~~~~~

At long last, the refuge for wildlife and the final resting place of  these historic vessels - not just the WWI ships, but the Civil War hulks and the 12,000 year old Native American artifacts as well.

Posted by Maritime Maunder at 1:35 PM