17 January 2019: In an article from the Yorkshire Post (England) the discovery of Bonhomme Richard, the ship on which American naval hero John Paul Jones uttered his famous words, "I have not yet begun to fight!" when asked if he would surrender, announced success in a several year hunt for wreckage. The article indicates little doubt in the accuracy of the the find, but several maritime archeologists have since come forward throwing a little doubt - or skepticism - on the discovery. We will stay with this find - I suspect we'll see more as the weather moderates in Britain and further dives are made - as we here at Maritime Maunder would really love to know the rest of the story.
But first, the Mr. Berhens' piece from the Yorkshire Post:
~~~~~~~~~~~~~~~~~~


He is as familiar to American maritime students as Admiral Lord Nelson is to ours – not least for having uttered the immortal words, “Surrender? I have not yet begun to fight” as his ship sank off the Yorkshire coast.
But while John Paul Jones went down in history as the father of the US Navy, the final secret of the stricken Bonhomme Richard is only now beginning to emerge from its watery grave.
Previously believed to be some six miles out to sea, explorers now say the site is walkable from the beach and visible from the cliffs above.
The revelation, at a meeting in Filey, before an invited audience of 100, has set off a scramble to claim the land for tourism, with the lucrative US market in sight. 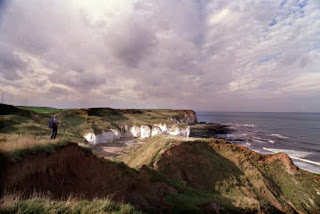 Mystery has for decades surrounded the exact location of the wreck. It went down in flames during the American Revolutionary war, at the bloody Battle of Flamborough Head in 1779, in which Jones led a makeshift flotilla of French ships into the North Sea, harassing commercial shipping as far as Bridlington.

In a deadly skirmish in which both sides claimed victory, Jones – who had fled his native Scotland to become one of the first commanders in the rebel service – took over the 50-gun British frigate HMS Serapis, and went to America a hero. As a result, the name of Flamborough Head is as embedded in US schoolbooks as Gettysburg.

The prospect of Americans making pilgrimages to Yorkshire to see at first hand where it happened, is a “considerable opportunity” for the region’s thriving tourism industry, one of the men behind the search for the shipwreck said.
“It’s one of the most significant elements that make up the founding history of the of the USA, and it’s right on our doorstep,” said Bruce Blackburn, chief executive of Merlin Burrows, a marine archeology firm based in Harrogate, which has now registered the site the Government receiver.
“It’s an amazing maritime find. It’s just brilliant.
“You can walk out on to the wreck from the shore. You can literally go to the beach and look in the water and see where it is. And you can go on the cliffs and look down on it and see the shadow’s outline. The question for the community is, who owns the land and who will build a visitor centre on it.”
American explorers have over the years spent an estimated $200m on trying to find what is left of Bonhomme Richard, a one-time merchant vessel given to the new colony by a French shipping magnate.

But Mr Blackburn said: “It’s not where everyone thought it was going to be. We have made a brand spanking new determination of where the wreck is actually located.”
The exact location has not been disclosed. “We’re not about to put the site at risk of souvenir hunters,” he said.

His firm made the discovery two years ago but withheld the information until registration documents had been lodged.
The delegates at Filey’s White Lodge Hotel were the first to hear of it, along with news of the discovery of wooden figurehead of a lion and shield that adorned the bow, and a carving of a shepherdess from the stern.
Mr Blackburn said: “We expect a task force to be formed that will get the visitor strategy in place. They can set up a Bonhomme Richard trail – people will land at Leeds Bradford or Manchester and make their way from there.
“We’re talking about a generation of employment – it’s that far reaching. Once the Americans learn of it, it will generate a lot of interest.”
Some of the debris recovered from Bonhomme Richard betrays burn marks consistent with the explosions that sank it, said Tim Akers, head of research at Merlin Burrows.
“The site itself is not easy to research. The debris is covered in sediment and it is very cold, but the preservation is very good,” he said.
More than 250 men died at Flambrough Head, with John Paul Jones’ ship lost as a result of what would now be considered “friendly fire” from a companion vessel.
Mr Blackburn, whose firm is now the wreck’s custodian, said: “He’s considered one of the founding fathers of the United States, despite the fact that he was effectively a Scottish pirate.”
~~~~~~~~~~~

Not sure we would label him as a "Scottish pirate" but then we aren't English. Perhaps, given the times and Jones' history,  "mercenary" might be more appropriate! In any case, should more appear on this (and I suspect it will) we will endeavor to update our readers, which as a matter of interest (to us anyway), are closing in on 80,000! WOW!


Posted by Maritime Maunder at 8:53 AM