IS THE EARTH FLAT?

10 January 2019: We have all (I assume) heard of people who are convinced the earth is not a ball floating in space, but rather a disk, i.e. flat. There are reams and reams of scientific information out there which quite thoroughly debunks this theory, but the Flat Earthers, as they call themselves, refuse to accept scientific proof, believing instead that images from outer space have all been photshopped and that reports from astronauts are simply lies offered to conform with conventional wisdom. The following is from the British periodical, The Guardian, and adds further fuel to the argument against the earth being flat. (Not that we need further proof!)


A group of people who believe the Earth is flat have announced their “biggest, boldest, best adventure yet”: a Flat Earth cruise scheduled for 2020.
The cruise, organized by the Flat Earth International Conference, promises to be a lovely time. Flat earthers – who include the rapper B.o.B. and reality television person Tila Tequila – will be able to enjoy restaurants, swimming pools and perhaps even an artificial surf wave.
There’s just one problem for those seeking to celebrate the flatness of the Earth. The navigational systems cruise ships, and other vessels, use rely on the fact that the Earth is not flat: theoretically puncturing the beliefs of the flat Earth crowd. 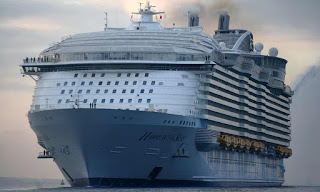 “Ships navigate based on the principle that the Earth is round,” said Henk Keijer, a former cruise ship captain who sailed all over the globe during a 23-year career.
“Nautical charts are designed with that in mind: that the Earth is round.”
Keijer, who now works as a forensic marine expert for Robson Forensic, said the existence of GPS, the global positioning system, alone is proof that the Earth is a sphere, not a flat disc. GPS relies on 24 main satellites which orbit the Earth to provide positional and navigational information.
“The reason why 24 satellites were used is because on the curvature of the Earth,” Keijer said.
“A minimum of three satellites are required to determine a position. But someone located on the other side of the Earth would also like to know their position, so they also require a certain number of satellites.

“Had the Earth been flat, a total of three satellites would have been enough to provide this information to everyone on Earth. But it is not enough, because the Earth is round.”
While there are different theories within the Flat Earth community, the core belief is the Earth is flat. The FEIC claims that after “extensive experimentation, analysis, and research”, its adherents came to believe the Earth is not a sphere.
A common model offered for the exact topography of the Earth is that it is a large disk, surrounded by “an ice wall barrier” – Antarctica.
The Flat Earth Society, which is not connected to the FEIC, has suggested that “the space agencies of the world” have conspired to fake “space travel and exploration”. 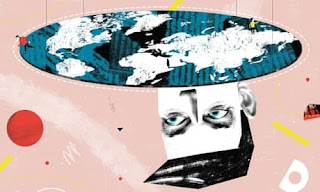 “This likely began during the cold war,” the Flat Earth Society says. “The USSR and USA were obsessed with beating each other into space to the point that each faked their accomplishments in an attempt to keep pace with the other’s supposed achievements.”
The FEIC did not respond to requests for more information on the Flat Earth cruise. The organization could potentially try to staff the cruise ship with a crew which does not think the Earth is round, but Keijer said that would be difficult.
“I have sailed 2 million miles, give or take,” Keijer said.
“I have not encountered one sea captain who believes the Earth is flat.”
~~~~~~~~~~~~~~~~~~~~~

Make your own decision; as for those of us at Maritime Maunder who have been to sea, navigated with GPS (among other methods), and have yet to "fall off the edge," we'll stick with the "big blue ball" theory.


Posted by Maritime Maunder at 9:09 AM