CROSSING THE OCEAN IN A BARREL?!

2 January 2019: We are back comfortably ensconced in winter quarters, reasonably healthy, and ready to offer pithy, ridiculous, inane, and perhaps humorous posts for your reading pleasure. Happy 2019 to all of you and may it be prosperous, healthy, and peaceful for everyone.
Today's post comes from the Epoch Times and, in our humble opinion, is quite beyond the pale. Leave it to a daring Frenchman!

Jean-Jacques Savin has no engine, no sail, and no paddle. But he has the currents, the winds, some foie gras, and a bottle of red wine ready for his 72nd birthday, which, if all goes to plan, he’ll celebrate in the middle of the Atlantic Ocean, in his reinforced plywood barrel. 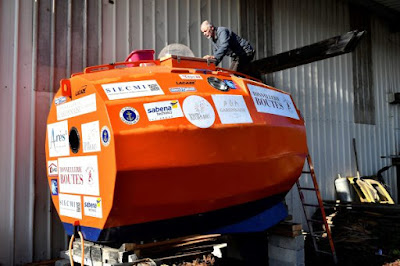 Savin, a former French paratrooper, cast off from the Canary Islands on Dec. 26 with plans to cross the Atlantic in his custom-made, orange, 10-foot vessel, relying only on ocean currents and wind to get to the Caribbean.
He believes that the 2,800-mile journey will take him 2 to 3 1/2 months, shunted at a speed of around two to three knots.
Savin, 71, will drop markers along the way to help oceanographers study Atlantic currents, and provide updates on social media to followers.
But with trans-ocean barrel travel still in its infancy [Really?: ed], he can’t predict exactly where he will end up.

“Maybe Barbados, although I would really like it to be a French island like Martinique or Guadeloupe,” he told AFP via telephone after setting off. “That would be easier for the paperwork and for bringing the barrel back.”
Savin will know his exact location the whole time thanks to GPS, powered by a solar panel set up for communications.
“The weather is great. I’ve got a swell of one meter (3 feet) and I’m moving at two to three kilometers per hour,” he told AFP. “I’ve got favorable winds forecast until Sunday. (30 Dec 2018)”

The barrel, made from plywood reinforced with resin, is designed to resist waves and even potential attacks from killer whales. It is about 7 feet in diameter and 10 feet long, weighs about 1,000 pounds, and has portholes on the sides, as well as a glass window sunk into the floor for watching fish swimming below. Savin funded the construction of the barrel—which cost about $70,000—mostly through crowdfunding. He does, however, have a sponsor: a French barrel-making company, with a 140-year history of wine storage.

A former triathlon champion, Savin is a seasoned adventurer, and in fine health, according to his website.

“His four swims across the Bay of Arcachon and his ascent of Mont Blanc in 2015 attest to his impeccable physical form.”
Savin says he has spent several years on sailboats, crossing the Atlantic four times.
“A sportsman at heart, I am taking advantage of my retirement to launch many challenges,” Savin told Actu.
“During my professional career, I worked as a military paratrooper, private pilot, and as curator of Central Africa National Park. These trades gave me a taste for risk and adventure,” he said.
Savin’s barrel journey was inspired by French adventurer and physician Alain Bombard, who, in October 1952, set off from the Canaries on an inflatable raft to pit his survival skills against the Atlantic Ocean.
“He wanted to show that a man can survive on a boat, if his morale is good, without water or food for several weeks thanks to the resources of the sea,” Savin wrote on his website.
After more than 60 days at sea, and despite setting off with almost no provisions, Bombard reached the coast of Barbados, alive.
He said he survived by fishing with a self-made harpoon and hooks, by harvesting the surface plankton with a small net, and drinking a limited amount of seawater.
Like Bombard, Savin sees his as a scientific and experimental voyage. But unlike Bombard, Savin is setting off on his journey with supplies. Bags of onions and garlic in string bags hang in the galley section of the barrel, and Savin has stowed a block of foie gras and a bottle of white wine for New Year’s Eve celebrations.
One bottle of red wine is set aside for Jan. 14—Savin’s birthday—and a third bottle is to be left unopened as an experiment to test how several months at sea in a barrel might affect a good Bordeaux.

We wish him bon chance and should anything further appear on any of my usual sources for this kind of craziness, I will be sure to let you know. In the meantime, it probably couldn't hurt to keep him in your prayers!

Until next time,
Fair Winds,
Old Salt
Posted by Maritime Maunder at 1:26 PM