On September 1, 1942, the Seabees of the 6th Naval Construction Battalion (NCB) got to work completing the unfinished Japanese airfield at Lunga Point, on the Island of Guadalcanal, that would become to be known as Henderson Field. Captured by the 1st and 2nd Marine Divisions less than a month earlier, this airfield had been a Japanese stronghold threatening Papua-New Guinea, Australia, and the shipping lanes that connected them to the United States and New Zealand, making it a vital strategic target for the Allies.  The Seabees would spend their time clearing and grading the center of the airfield, adding 1,300 feet to the existing air strip, and improving it for use by heavy bombers, in addition to fighter aircraft.  The Seabees had to excavate and refill many portions of the airfield due to the soil in the area being waterlogged muck.  Throughout all of this, the Seabees were under nearly constant air and artillery attack, which created the need to repeatedly fill in craters, regrade the ground, and re-lay Marston matting. 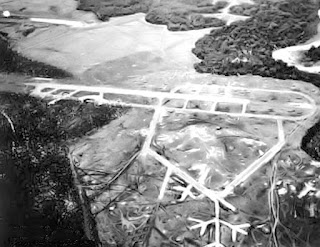 While the Japanese used large warships to fight the Allied naval forces, they also used small two-man midget submarines.  Based at a small installation on the western side of Guadalcanal, or carried to the island by larger submarines or surface ships, these submarines were sent out to attack the ships of the Allied fleet that sailed the waters north of the island.  One of these sunken submarines was found by a group of surprised Seabees when the Higgins boat they were on hit the submarine’s periscope. 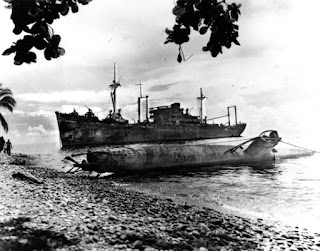 While initially thought to be a naval mine, the Seabees soon realized they had run into a Type A Ko-hyoteki-class submarine in 20 feet of water, 300 feet offshore near Tassafaronga Point, between the landing beaches near Henderson Field and Cape Esperance, located on the northwest shore of Guadalcanal.


The Seabees were determined to get the Japanese submarine out of the water. A small reconnaissance team, led by Chief Machinist’s Mate Robert E. Mitchell, donned repurposed gas masks attached with rubber tubing to a compressor and investigated the submarine and reported it to be in perfect condition, lying right side up, and still armed with two torpedoes. The Seabees tried to pull the submarine out of the water. Carpenter’s Mate First Class (CM1) Ralph D. Andrews and Boatswain’s Mate Second Class (BM2) George U. Ainsworth spliced together several sets of rigging made from one-inch cable and attached their ends to the front and back of the submarine and the other ends to tractors driven by US Marines on the shore.  After multiple attempts to free the sub using the rigging, it was found to be stuck fast to the bottom.

Undeterred, the Seabees decided to resort to other methods.  CM2 Harlow S. Ballard and CM3 Edward R. Cabana placed eight sticks of dynamite under the submarine to help dislodge their prize.  After clearing the area, the dynamite was detonated and the submarine was unsurprisingly freed from its sandy grave.  The submarine was then pulled out and beached near the wreck of the Japanese transport ship Yamazuki Maru.  After a thorough inspection of the submarine by US Navy officers, the unknown submarine became a “must-see” among the Allied personnel stationed on the island.
The story of the submarine, after its discovery by the Seabees, has been lost to history. 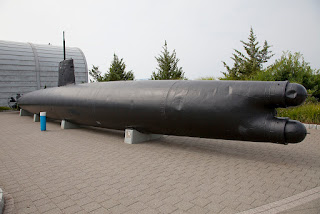 Today only four of the 101 submarines of this type remain in existence: One in Australia, one in Texas, one in Japan, and one at the US Navy Submarine Force Museum, in Groton, Connecticut (another one of the official US Navy museums operated by the Naval History and Heritage Command).  While the US Navy Seabee Museum does not have a real submarine in its collection, the museum does have the archival material about their find on Guadalcanal which made the research for this article possible.
~~~~~~~~~~~~~~~~~~~

That's real perseverance by the SeaBees (which, in case you were unaware, stands for "construction battalion"). These guys were invaluable in the Pacific portion of WWII to the US forces working across that theater.

So, that will do it for now. Until next time,

Posted by Maritime Maunder at 12:10 PM