2 October 2018: Here's an interesting tale from Australia. The Australian Navy's first functional submarine, HMAS AE1, sank 104 years ago with 35 crewmen aboard who all perished. Until recently, no one was sure where or why she went down. Here's the story (or as we used to say in the Navy, "the straight skinny!") courtesy of Australian AP.
~~~~~~~~~~~~~~~

Investigators have solved the 104-year-old mystery about what sank Australia's first submarine, sending 35 sailors to a watery grave off Papua New Guinea. 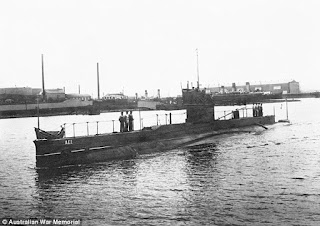 The HMAS AEI sank on 14 September 1914, with dive experts convinced a partially opened ventilation valve in the hull caused the tragedy.
The submarine was the first wartime loss for the Royal Australian Navy and the first Allied submarine loss in World War I.
Experts who analysed the World War I wreck believe the HMAS AEI sank after a ventilation valve in the hull was left partially open when the sub dived. 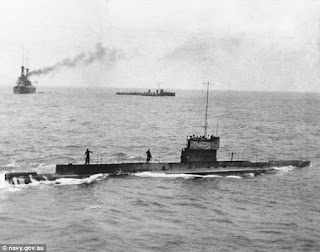 The sub was last seen on patrol off East New Britain on September 14, 1914 during an otherwise successful operation to seize the German colonies in New Guinea and the South Pacific. 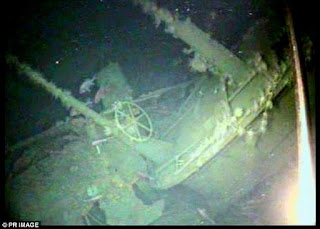 But all 35 submariners on board were killed when an implosion ripped through the vessel as it sank to its 100-metre crush depth, an Australian National Maritime Museum report said.

It was not clear whether it was human error or a mechanical failure that caused the fault.
But an open valve, though, may have caused water to flood the engine room.
A search by five navy ships in the days following failed to find the sub, nor any tell-tale shimmer of escaping oil floating on the surface of the water.

And there was no distress call to help guide the search.
Enemy action was not suspected because the only German vessel nearby at the time was a small survey ship.
In December 2017, the wreck was discovered in 300 metres of water during a search off the Duke of York Islands, near the New Britain capital Rabaul.
It was the 14th attempt to find the vessel and the resting place of her crew.

In April 2018 an expedition was conducted to the site of the wreck, yielding some answers to what happened 104 years ago
AE1's final contact with destroyer HMAS Parramatta at 2.30pm, more than a century ago, had placed her in the area.
Mioko Island villagers at the time also spoke of seeing a 'monster' or 'devil fish' that appeared and quickly disappeared back into depths.
AE1 was one of two E-class submarines built in Britain for the new Australian navy.
It was launched in May 1913 and commissioned in February 1914.
The other E-class sub, AE2, achieved fame when she penetrated the Dardanelles waterway at the same time Australian troops landed at Gallipoli.
After attacking Turkish shipping in the Sea of Marmara, AE2 came under fire from a Turkish gunboat and was scuttled so she would not fall into Turkish hands.
All of her crew were captured and became prisoners of war.
That wreck was discovered in 1998.

So, maybe closure for a few (now) distant relatives of the crew members, but at least, the question of why has been answered.

Posted by Maritime Maunder at 12:43 PM