20 October 2018 If it seems as though we talk/write a lot about the discovery of wrecks, I reckon it's because new ones keep turning up. Is it more exploration, shifting sands, expanding harbors (dredging, as in this case) or just really good research and and exploration? We don't know, but suggest it might be a combination of all four. Or just plain dumb luck - especially when the wrecks are found in shallow water, as this one was.

A 400-year-old shipwreck that signified a time when the spice trade between Portugal and India was booming has been uncovered 40 feet below the water's surface during a dredging project.
The shipwreck was discovered off the coast of Cascais, Portugal, not far from the capital, Lisbon. 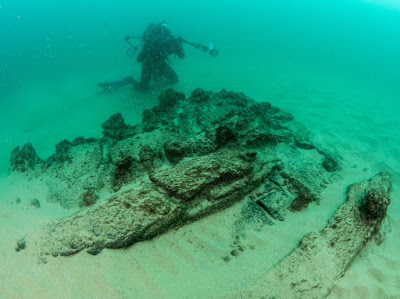 According to BBC, archaeologists believe the ship sank as it was returning from a voyage to India sometime between 1575 and 1625.
Divers searching the wreck have found spices, nine bronze cannons that were engraved with the Portuguese coat of arms, Chinese ceramics and cowrie shells, which were once used as currency to trade slaves, according to Reuters. 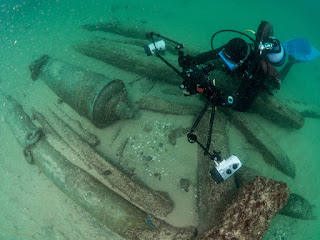 Jorge Freire, project director, told Reuters that this "is the discovery of the decade."
In Portugal, this is the most important find of all time," Freire says.
The Portuguese government's directorate-general for cultural heritage plans to examine the items found aboard the wreck, The Guardian reports.
Freire tells the newspaper, "We found the ship on 4 September, using a geophysical survey and divers, and spent four days working on the site." 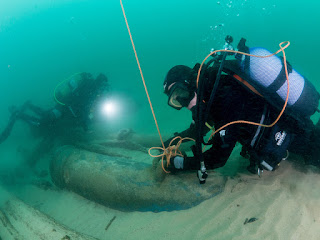 The last time a Portuguese shipwreck was discovered, was in 1994. The ship, Our Lady of the Martyrs, was found in the same general area, close to a military defense complex near Cascais.

And yet another one gives up its secrets to underwater archeologists.

Until next time,
Fair winds,
Old Salt
Posted by Maritime Maunder at 12:25 PM