EVERYTHING OLD IS NEW AGAIN

7 August 2016: Greetings from the sunny Caribbean! Nice day here, but hot and humid. So today we're going to talk about moving cargo the old fashioned way - under sail. And, by the way, this is our 200th post to Maritime Maunder! The 2nd anniversary is still a couple of weeks out, so in spite of a couple of lapses, I think we're doing pretty well! And now, on to today's subject! 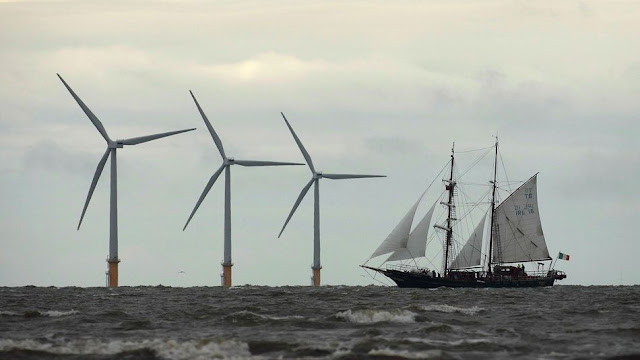 Amid the dozens of cargo ships now steering through the North Sea, one vessel stands apart: the Avontuur, a 144-foot-long schooner powered only by the wind and sun.

Stocked with crates of artisanal gin and vodka, the emissions-free cargo ship is making its maiden voyage from the tiny town of Elsfleth in northwest Germany and around the tip of Denmark to Rostock, on Germany’s northeast coast.

After Rostock, the crew plans to spend the next one to two years hauling organic wines, fair trade coffee and other sustainable fare to ports across Europe, North America, the Caribbean and, eventually, Australia.

The Avontuur, whose name means “adventure” in Dutch, is the newest and biggest member of a growing fleet of cargo ships that combine centuries-old technology — sails and masts — with modern inventions like solar panels and battery generators.

The goals of the emissions-free shipping movement are two-fold, said Cornelius Bockermann, the Avontuur’s captain and founder of Timbercoast, the company behind the mission.

The 96-year-old schooner embarked on its first mission on July 28 and is expected to arrive in Rostock by Aug. 11 for the start of Hanse Sail, a festival featuring other old-school vessels, though none of the others are equipped to carry cargo.

Bockermann said he spent more than 700,000 euros ($786,000) from his personal savings to upgrade the Avontuur into a working cargo ship. A team of more than 100 volunteers from around the world helped carry out the renovations and take it for test runs.

Avontuur Shipping Co., as the project is formally called, is now seeking to raise around 630,000 euros ($708,000) from individual investors, who can purchase small shares in the company and would split the profits from the Avontuur’s import-export business.

Pretty neat, I think, and possibly the start of a trend. Plus, what is prettier than sailing vessel plying the seas with a good breeze!