21 February 2016: This article crossed my desk recently and I thought it really a fine example of what lengths people will go to to save ancient wrecks. And the Dutch are truly water-oriented and mindful of history!  Enjoy!

"A nearly intact medieval shipwreck has been hauled from the frigid waters of a Dutch river.


"The wooden, flat-bottomed ship was first discovered in 2012 while a national organization was carrying out investigations to preserve water safety in the Dutch river. (Rijkswaterstaat, the Netherlands) 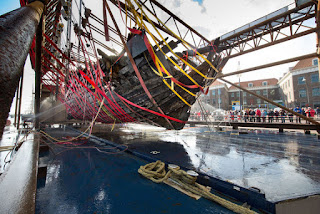 "The boat was likely deliberately sunk by maritime engineers more than 600 years ago in an effort to alter the flow of the Ijssel River, an offshoot of the mighty Rhine River that flows through six European countries. The trading ship sailed at a time when the Hanseatic League, a group of guilds that fostered trade across Europe, dominated the seas.


"The fact that we were able to raise the Ijssel cog [a type of wooden vessel] in its entirety and in one attempt is a fantastic achievement by the entire team," lead maritime archaeologist Wouter Waldus said in a statement. "The shipwreck can become a symbol of our rich maritime history, and I fully expect many people, both young and old, to be amazed by and start enjoying this ship from the Hanseatic period's fascinating story."


The boat was first discovered in 2012 at the river bottom during efforts to widen the flow of the Ijssel River. The massive ship was lying perpendicular to the river flow, along with a medieval barge and a punt, a specialized ship designed for navigating river deltas.

Over the course of the next three years, maritime archaeologists put in place a painstaking, meticulous plan to recover the ancient seafaring vessel. First, the team built a platform and crane on the river, then built a protective frame around the ship to lift it out of the water. After suctioning gunk from the area inside the frame, the archeological team created 3D images of the boat underwater. Only then were the team members ready to carefully lift the boat out of the water, using a basketlike structure made of straps, crossbeams and jacks. Each strap had its own motorized control to allow perfectly precise maneuvering in response to the forces experienced in the ship. 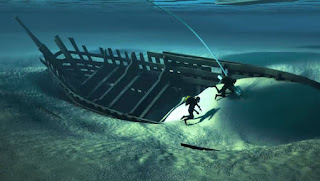 "This was an incredibly involved operation and was almost as impressive as the cog itself. The raising of the 65 feet ship was complex, in the middle of the river, near the navigation channel. Also, as a result of the fact, three different specializations had to work together here: an archaeological research team, divers and storage specialists," said Ben Broens, an official with the Rijkswaterstaat, a water management bureau in the Dutch government, which helped oversee the salvage operation.


It turned out the 55-ton (50 tonnes) ship was a medieval cog, a type of wooden vessel with a steep, straight ship prow and deck beams that stick out from the boat's skin. Cogs were typically used in the late medieval period on international trade voyages. Many of the structural support elements, such as nails, were made of metal, meaning it was sturdier, and therefore easier to take out of the water without falling apart.


The team believes the ancient seafaring vessel was likely sunk deliberately. It was placed perpendicular in the stream of the river. By looking at medieval maps and historical documents and recreating the historical path of the river, the team found the ship was sunk at a time when silt was building up, creating huge sandbanks along the Ijssel River. Those sandbanks would have prevented ships from docking properly, so the ship, along with the barge and punt, were likely sent to the bottom of the river in a bid to narrow the river flow or divert it in a way that would improve sea traffic.
Though the ship was stripped of much of its original finery, the team did find an intact brick oven, as well as gorgeous glazed tiles, in the galley area of the ship.

Now that the ship is safely out of the water, the team will transport it inside its custom-made frame to a preservation facility in Leylstad, the Netherlands. 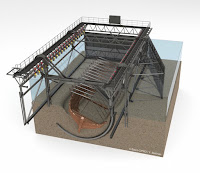 There, it will undergo a painstaking process of drying out, which could take another three years. If all goes well, the Ijssel Cog will be placed on display in a museum.
But if the ship can't be dried out safely, it will be studied thoroughly before being destroyed."

So bravo Zulu to the Dutch maritime archeologists!