28 February 2016: Sorry for the delay in posting folks; lost track of time for a few days. I won't say it won't happen again, as it likely will, but I will try to be more consistent with news of the maritime world. And for today, a little item about the hazards of cruising in that garden spot of the southern ocean, Antarctica. Never mind that it IS summer there... (the temps can get all the way up to 32 deg. F)

So, Australia's biggest and best icebreaker, Aurora Australis, broke loose from her moorings during a "summer" squall - 80 kt winds and blinding blizzard snow - and ran ashore at the Mawson Station in Antarctica. That's at West Arm in Horseshoe Harbor. 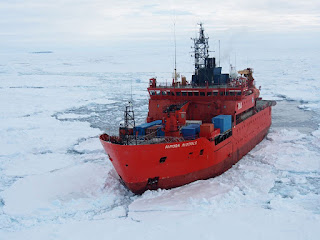 Here she is afloat - presumably "breaking" ice. And she is capable of cutting through ice as thick as 4 feet! She displaces 3,911 tons and is 95 meters long (that's about 311 feet for those of you not able to deal with metrics) and, at the time of the "problem," she had some 68 souls aboard. Let me say right off, none were hurt in the grounding and the ship remained intact - mostly. She had arrived at Mawson on 20th February.
The ship was designed as a multi-purpose research and resupply vessel for use specifically in Antarctica.
The Aurora Australis grounded near the station in Horseshoe Harbour after breaking free of its mooring lines during a blizzard on Wednesday. All 68 expeditioners and crew were left stranded aboard the ship as they rode out the storm.

﻿﻿
On Friday (26th February), improved weather conditions allowed the transfer of the 37 expeditioners by barge to shore and back to the Mawson station. The Aurora Australis was later refloated using the ship’s ballast system and work boats.
The vessel was expected to head to a sheltered area close by for an initial damage damage assessment and to ensure no fuel is leaking. The crew onboard continues to monitor a breach in the ship’s hull, which occurred into a space that is usually flooded with ballast water. The Antarctic Division said the breach continues to pose no risk to the stability of the vessel or release of fuel. So far monitoring of the ship’s fuel levels and the environment have shown no evidence of any fuel spill so far.
The assessment of the vessel is expected to take about 3 days, the division said.

So much for a pleasant summer cruise!

Posted by Maritime Maunder at 10:56 AM