20 January 2016: They were built to sail across the Atlantic Ocean to aid the allied effort in World War I, but wound up unused, abandoned, stripped and finally scuttled.

Almost a century later, the "ghost fleet" of Mallows Bay in the Potomac River, 30 miles south of Washington D.C., is positively brimming with life again.
Nature has taken hold amid the rotting hulls and rusted bows of the scores of historic vessels, with flora and fauna inundating the areas where sailors and passengers once stood.
"It has become this really amazing mecca for wildlife," Joel Dunn, president and CEO of Chesapeake Conservancy, said recently.
What is this "Ghost Fleet" Mr. Dunn refers to? 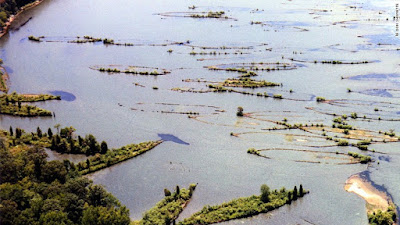 Over the years, ships no longer useful have been abandoned in Mallows Bay on the Potomac River, a junk yard, if you will, for vessels not even worth scrapping for their metal.
It started after WWI;
the majority of ships clustered in Mallows Bay date back to the early 20th century. The so-called "ghost fleet" was part of an unprecedented shipbuilding program undertaken by the U.S. to assist its European allies during World War I.
"When America entered the war in April 1917, two out of four ships leaving a British, French or Italian port was being sunk," Don Shomette, a well-known Chesapeake historian and writer, explains. "So the process of continuing the war was going to go in Germany's favor."
With the allies needing boats, and fast, President Woodrow Wilson answered the call for help, setting up the Emergency Fleet Corporation to build and operate merchant and military fleets.
"Within a year we had a million men building ships, cutting the timber, mining the iron for them, building the machinery for them. At one point we became the greatest shipbuilding nation in the history of the world," Shomette says.
"We had to create from nothing a shipping industry that was going to build a thousand wooden ships in 18 months -- normally it would take a year and a half to build a wooden steam ship."
At Hog Island in Pennsylvania, one of three major steel shipyards built by the government, 50 shipways extended for a mile and a quarter down the Delaware River. At its peak, its 30,000-strong workforce was launching vessels every five to six days.
When the war ended, however, these ships - the ones that survived the German attacks - quickly became surplus and the question arose of what to do with them. Mallows Bay became the answer. 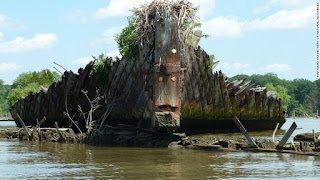 "We have 185 archeologically-documented shipwrecks in a 14-square-mile area, which makes it one of the most densely-populated places in the western world for historic vessels." Says Mr. Shomette 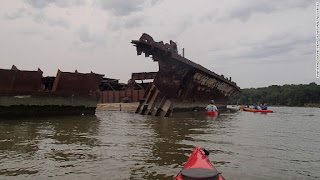 It is one of two sites -- the other is on Lake Michigan in Wisconsin -- being considered for sanctuary status by NOAA (National Oceanic and Atmospheric Administration).
The announcement made by President Obama in October 2015 was the first time since 2000 that an official nomination for national marine sanctuary status had been made.
If successful, Mallows Bay will join 14 existing ecological havens including the Florida Keys and Thunder Bay in Lake Huron -- one of the five Great Lakes -- where nearly 100 vessels have been discovered to date, earning it the nickname "Shipwreck Alley."
Final determination will be made possibly this month. It will be a coup for the Chesapeake Conservancy, the people living near by, the flora and fauna now taking over, and those  who wish to explore this ghostly but thriving area called Mallows Bay.
Thanks to CNN and Don Shomette for contributing to this post. Don, by the way, is the author of "Ghost Fleet of Mallows Bay And Other Tales of the Lost Chesapeake" -- a book borne of a deep-rooted attachment to the site which began on a camping trip with his father in the 1950s.
Until next time,
Fair Winds,
Old Salt

Posted by Maritime Maunder at 7:22 AM