HAWAIIAN CANOE SAILING 'ROUND THE WORLD

1 January 2016:  Well, here we are; another year gone by and while we're all a bit older - OK just a year, but still.... - we have hopefully learned to press on, facing "come what may" in the new year. It's bright and shiny, filled with hope and promise of good stuff, accomplishments, a few resolutions, and maybe, some successes. So let's not screw it up! At least for a while! Good luck!

So, here's a little story about hope, success (at least so far) and some derring do.
In 2013, the 62' traditionally built Hawaiian canoe, Hōkūle'a, set sail around the world. OK, you say, so what's the big deal? Well, there are NO electrics aboard. You can't use modern navigation instruments aboard the Hōkūle'a. Crew members must use only the sun and the stars to get themselves from point A to B. For many of us who can't seem to go the grocery without the assistance of GPS, here's a major big deal. Oh yes, and since they're sailing, their route is designed to be downwind pretty much all the time.

The 62-foot-long, double-hulled canoe set out from the Hawaiian shores in 2013. It will cover more than 60,000 nautical miles by the end of its journey. which is scheduled to finish in 2017. 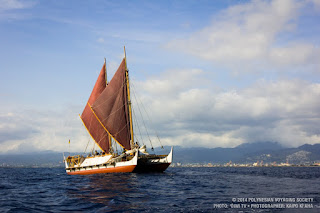 Each stop includes time for tours, lectures or traditional voyaging (that's what they're doing), and visits. Crew is all volunteer, trained, and changes often as people sign up for whatever time they can afford. Crew members take shifts steering and caring for the 40-year-old vessel, swapping stories over plates of line-caught fish, and sleeping under the stars. Sounds  pretty neat - and a little scary as well! But they look happy! 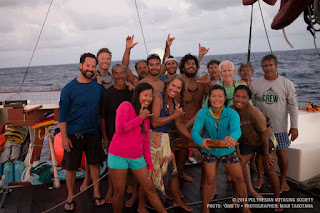 
Here's a map of their route and projected stops. 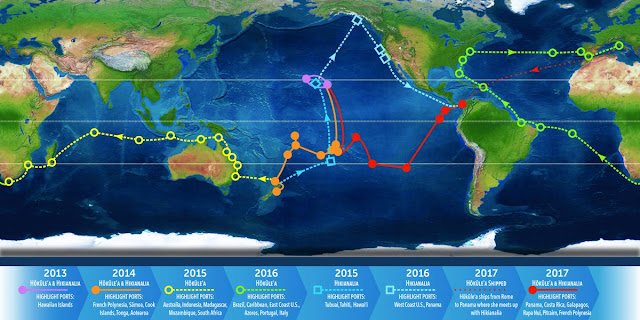 So there you are! Truly a fantastic voyage! Happy New Year!