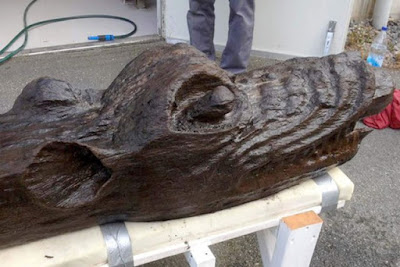 Aside from being remarkably well preserved (I guess the really cold water there in Sweden is good for preservation!) it is an imaginatively carved critter which, I am sure, struck terror into the hearts of the enemies of the Danes! And warded off evil spirits as well!
To put in perspective the age of this artifact, consider that when this figurehead last saw daylight, Christopher Columbus was alive and Leonardo Da Vinci was creating his masterpieces!
The wreck was found in the Baltic Sea, south of Stockholm, discovered by sport divers in the 1970's but was not identified for several decades. As I mentioned above, it was the Gribshunden, which sank in 1495, and belonged to King Hans. The ship died not in battle, but was anchored in Ronneby en route to Kalmar when it caught fire and sank. It had been built most likely in Flanders with timbers harvested in France around 1482-3. Amazingly, the wreck is quite intact, considering its age. The low salinity of the Baltic prevents boring worms and other nasty critters from eating the wood.
Following preservation, the figurehead will be on display in Ronneby, Sweden this autumn.
Until next time, friends,
Fair Winds!
Old Salt
Posted by Maritime Maunder at 7:29 AM