CIVIL WAR ENDS BUT NOT AT SEA

10 April 2015: I realized, only after pushing the "publish" button on the last post, that it was our 100th post! I suspect that some of you (like me) never thought we'd get to 100, but we have and I am told that some people are enjoying them. We have passed 3500 readers and keep adding countries to the growing list of participants. I would love to hear how some of you in far away places found Maritime Maunder; I find it amazing, but incredible, that people in Russia, India, Turkey, and Taiwan, France, and Switzerland have signed in to read it. Email me or use "comment" on blog site to tell me how you found us and what you think! (Email is topsl@seafiction.net)
So for today: the American Civil War ended yesterday 9th April, but in 1865, with the surrender of the Confederacy to the Union at Appomattox VA. But what many don't know is that there were several very effective Confederate "raiders" sailing the seas and laying waste to Union shipping, but commercial and naval. Two of the more famous - notorious? - were Shenandoah and Alabama.

Today, we'll talk about the raider Alabama and in our next post, we'll tell you the tale of Shenandoah, probably one of the most famous privateers ever.
So ALABAMA: She was a "screw sloop-of-war" (that meant she had sails but also a propeller (as opposed to a side wheel or stern wheel). Built secretly in England for the Confederate Navy, she served admirably as a raider of merchant and naval vessels belonging to Union interest for her two year life. For the English to avoid violating their somewhat tacit neutrality, she was built as "hull number 290", launched on 15 May 1862 as Enrica and slipped out to sea in late July. A civilian captain and crew sailed her to the Azores where Capt Raphael Semmes assumed command, put aboard a naval crew, reconfigured her with guns, more coal, and a modified rig. In three days of round the clock work by the civilian crew, the new naval crew, and the crew of the Confederate supply ship (brought over the guns, coal, and new crew), CSS Alabama was born, named a Confederate Raider, and went to sea. Her armament consisted of 6 broadside 32-pounder cannon and 2 pivot guns, one a 100-pounder 7 inch bore (rifled) and the other an 8" smoothbore. Both were mounted on the center line. She was 220' long and displaced 1050 tons and was capable of speed of 13 Kts under power.
She sailed the eastern Atlantic, basically raising Hell with Union merchant shipping. In January 1863, she entered the Gulf of Mexico and quickly found and sank the Union Navy side-wheeler, USS Hatteras off Galveston. She then headed south, cruising with good success off the coast of Brazil then over to Africa where she continued her depredations on merchant ships owned by Union interests. Union warships hunted unsuccessfully for this scourge of the Atlantic, but each time they saw her, the Alabama was able to sail/motor away, leaving her pursuers in the dust!
In June 1864, Alabama made port in Cherbourg France for a refit and overhaul. Semmes requested and received permission to drydock his ship. The U.S. Sloop of war USS Kearsarge arrived two days later and basically blockaded the harbor. Semmes, however, would not shirk; he sent a message to Captain Winslow in the Union ship that he intended to come out and fight within a few days, and please wait for him! They met on 19th June and maneuvered to gain an advantage. Little in the art of naval warfare had changed in the previous 50 years and positioning your ship to deliver a "raking fire" - a broadside fired into the bow or stern of the enemy and obviously decimating the deck and its people - was paramount in the minds of both captains. Alabama managed it first, and a shot from the 7" rifle into the stern of Kearsarge very nearly ended it quickly. It was pure good luck for Winslow and his crew that the shell did not explode! Unfortunately for the Confederates, their gunnery was not as accurate as the Union's and, with the benefit of the outboard chain armor on Kearsarge, the contest ended with the sinking of the Confederate raider. 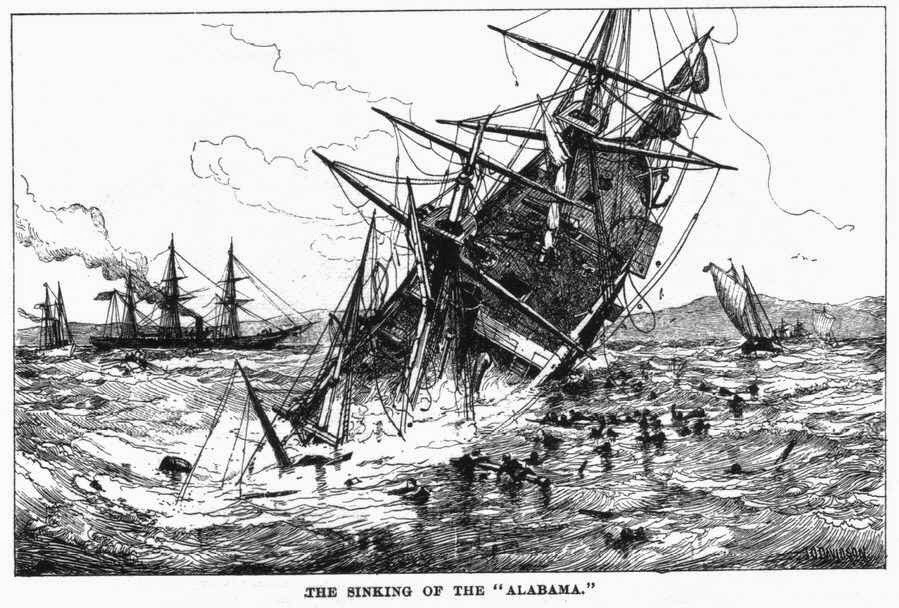 Interestingly, some 41 of the Confederate survivors, including Capt Semmes, were rescued by a British yacht owned by John Lancaster named Deerhound. Lancaster spirited them away to England while a frustrated Capt Winslow, busy collecting his rescue boats, could do nothing but watch. And to add insult to injury, shunning the traditional relinquishing of the vanquished's sword, Capt Semmes flung his into the sea, further frustrating the Union commander!
In 2002, a diving expedition raised many artifacts, including the ship's bell, from the wreck of Alabama. They are now housed in the Naval History And Heritage Command conservation lab, Washington DC.

Next time, Shenandoah. Even more colorful! Until then, I wish you all

Posted by Maritime Maunder at 1:48 PM