19 February 2015: In 1945 on this date, one of the bloodiest battles of the Pacific war began. The Battle for Iwo Jima, along with the Chosin Reservoir fight in Korea, is synonymous with the United States Marines.  Following a pounding by naval guns and bombs dropped from 110 U.S. bombers and yet another lengthier round of shore bombardment from the ships offshore, the order was given to "Land the Marines!" For over a year, the Army Air Corps had been bombing the island in an effort to dislodge the 26,000 Japanese soldiers there.

As an indicator of the importance of this battle, Secretary of the Navy James Forrestal was an observer on an off-shore command ship. 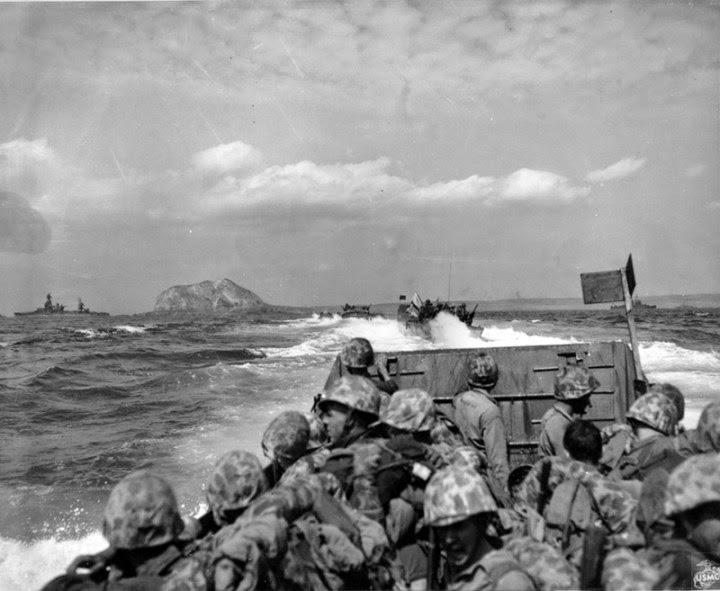 Unlike other islands in the Pacific Theater, Iwo was volcanic, filled with caves covered by loose volcanic ash. The Japanese soldiers were dug in, ordered and committed to defend to the death, this little 7.5 mile island. The Marines, already well blooded by their earlier conquests, would not secure this island for 36 days! And there were 100,000 U.S. fighting men and 26,000 Japanese on this tiny spot in the Pacific, making it, for those 36 days, the most populated 7.5 miles on earth! 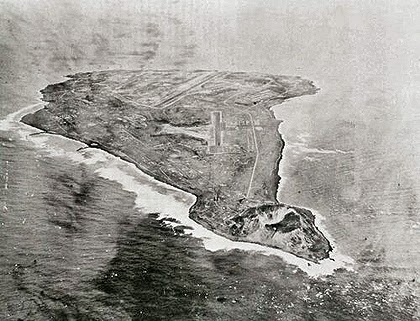 The Marines had to fight for every inch they gained, unable to dig in since the soil was so loose  (and under the ash was hard rock) and facing defenders who had set themselves up on the zillions of caves, machine guns ready to cut down their attackers. In fact, it was said - after it was all over - that the Marines rarely saw a live Japanese soldier! Some of the contemporary historians labeled the fight akin to "throwing human flesh against reinforced concrete." But, while our guys could see few if any, Japs, the entrenched Japanese soldiers could see everything. And even before the Americans landed, the Japanese had targeted every square meter of the island and the approaches from the sea. There was 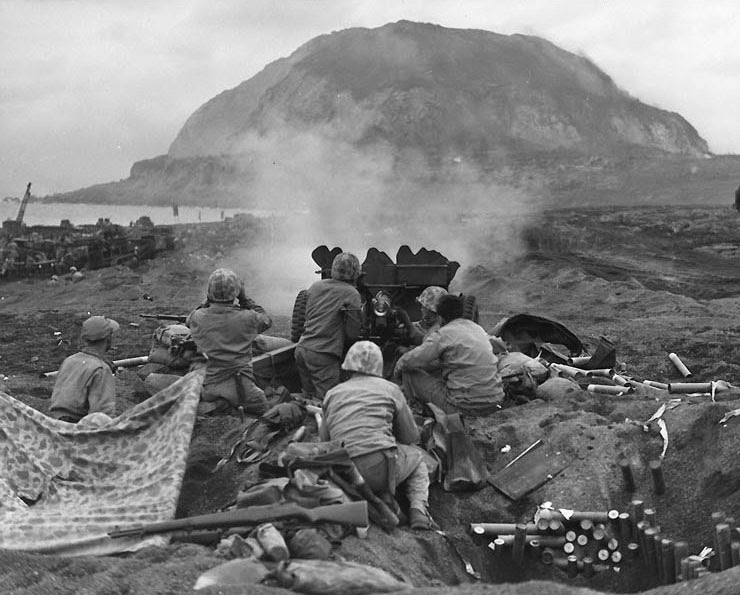 nowhere that the Marines could get shelter from the horrific machine gun fire, rockets, and anti-tank guns.
If the Marines could get themselves close enough, they found that liquid gasoline, napalm, and hand grenades were most effective. the U.S. mortality rate was staggering - for example, of the 310 men of Easy Company who went ashore, only 50 returned and 1 of the 7 officers survived. As I mentioned, staggering. And on a percentage basis, worse for the enemy.

Of course this battle gave rise to one of the most iconic images to come out of the whole war - the Raising of the U.S. flag atop Mt. Suribachi. Getting to that point took the Marines 4 days of bloody fighting. What many are unaware of, that image was staged after the men had already put up the flag and Joe Rosenthal, an AP photographer documenting the battle, asked them to do it again as he had missed the first time. Here is the image of the first flag raising on Suribachi: 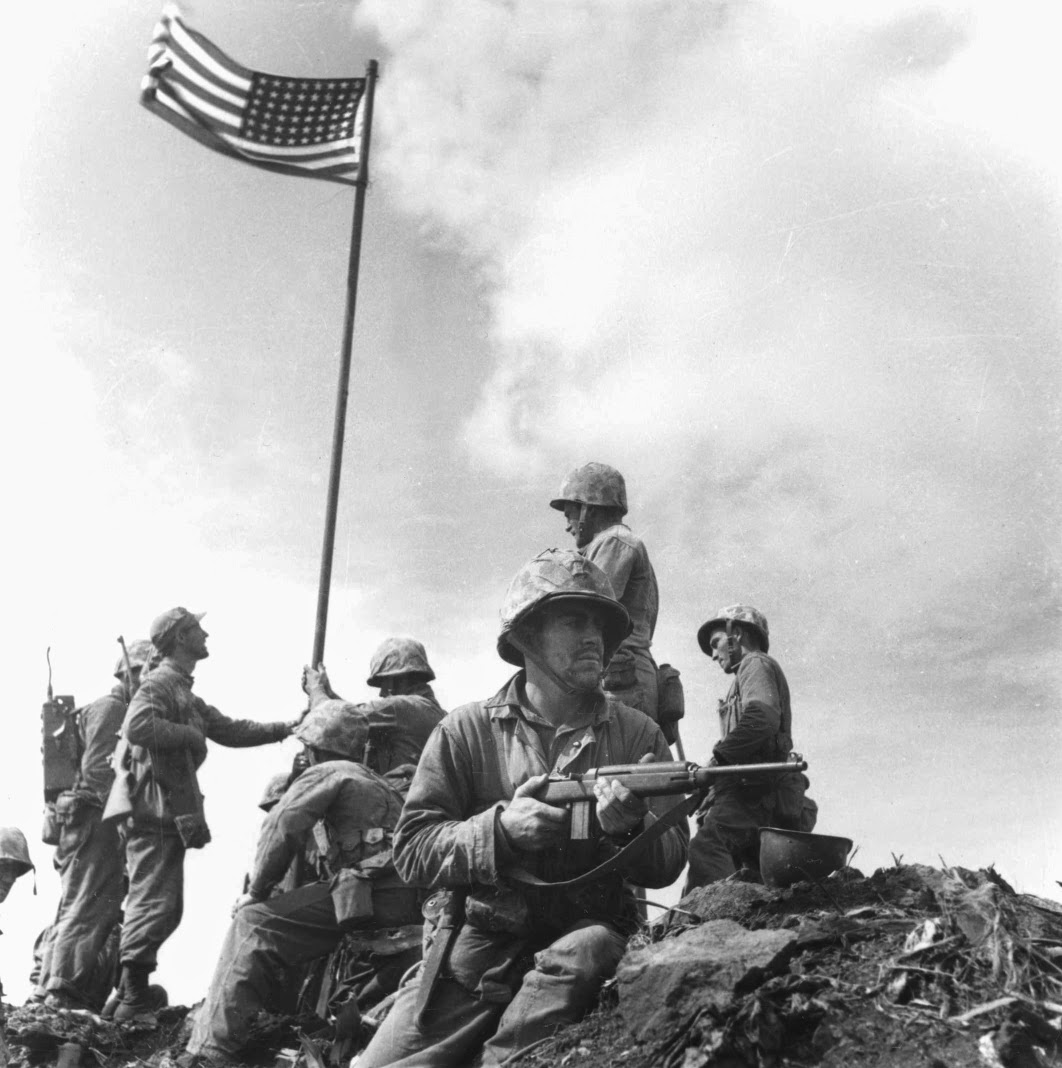 Of course, the image was used to create the Marine Corps Memorial monument in Washington DC, adding millions to the numbers who saw it. As a matter of interest, it is the largest bronze statue in the world.
Unlike today, with the press making heroes (and no mistake, some truly are) of every war fighter (and the occasional news reporter) who returns from the frontlines, these Marines were humble, reticent to discuss their struggle, and got relatively little of the "hero-worship" offered today. In their collective minds, the "heroes" were the guys who didn't make it back. Those six men did, however, get sent home (the five Marines and one Navy Corpsman, John Bradley, who raised the flag) to sell war bonds across the country.
It is also of note that the mountain was captured and the flag raised a full month before the rest of the island had been secured!
So, think about that and give thanks that these guys - by the way, most were 17, 18, and 19 year olds - did their jobs and continue to today, in spite of the difficulties they face both at home and on the battle front!
Fair Winds - and SEMPER FI to my Marine buddies!
Old Salt﻿

Posted by Maritime Maunder at 5:31 AM