Well into January and the weather is doing it's usual squirrelly tricks! West coast of the United States is getting hammered with unbelievable rains and floods and the middle of the country and Florida are heading for the deep freeze! Spring can't show up soon enough!

In past posts, we have written the story of HMS Erebus and HMS Terror, the ships of the Franklin expedition which were sunk in the Arctic in 1845. They were discovered by dive teams and archeologists from Parks Canada and England. We mentioned in those posts that should more information come to light, we would share it; naturally there would be more dives (the frigid waters there limit when divers can go in) and more exciting discoveries. And then the pandemic hit and all diving was suspended (though we're not sure if Covid could survive in the cold and under water, but there you go!) until this past Autumn. Terror has yet to be fully explored as the scientists are currently concentrating on Erebus, a shallower and more accessible wreck. The following combined and edited from Tech Times and the Robb Report:

A team of archaeologists took a deep dive into the depths of Northwest Passage and found some eye-catching finds in two of the most famous shipwrecks from the 19th century. 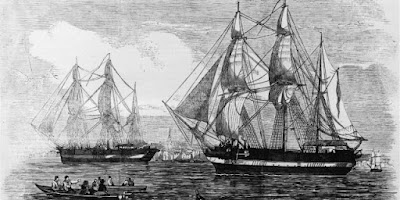 Now, the team from Parks Canada has studied the shipwreck, "Erebus", in its full condition after its groundbreaking discovery in September 2014, which was two years before they found another wreck called "Terror" just 45 miles away.

The two ships, both commanded by explorer Sir John Franklin, set off from England in 1845 with 128 crew members in quest of the Northwest Passage, which would connect the Atlantic and Pacific Oceans via the Arctic.

The expedition's failure was described in a note that was later found. Both ships got stuck in ice and there were no recorded survivors.

Only a small portion of the year is appropriate for diving in arctic waters. Several items, such as a cannon and kitchenware, were discovered during Erebus' first investigation in the spring of 2015, as per Artnet News' report.

Sample gathering was the main focus of 2016. Due to technological issues, the 2017 excavations were moved to 2018.

Meanwhile, 350 objects, including wine bottles and a hairbrush, were found by archaeologists in the summer of 2019.

There were around 30 expeditions that looked for these sunken ships. However, they only found a few artifacts, a few tombs, and horrifying stories of cannibalism, according to CBC Canada.

Dives to the wrecks were off-limits during the pandemic, but Parks Canada’s archaeologists and local Inuit guardians from Gjoa Haven were finally able to return last year. In April and May 2022, the team checked on the physical condition of Erebus with a remotely operated vehicle (ROV) called Deep Trekker.

The crew made its post-pandemic comeback last summer, performing 56 two-hour dives over 11 days.

The Arctic has short field seasons. Hence, the divers and conservators had only spent 11 days moored above the wreck with their tender barge and the RV David Thompson -  a 29-meter research ship owned by Parks Canada.

“Located in one of the planet’s most unique and sensitive marine environments, the wrecks of HMS Erebus and HMS Terror are some of the best-preserved wooden wrecks in the world,” Steven Guilbeault, Canada’s environment and climate change minister, said in a statement. “The important archaeological research onsite continues to advance our understanding of how changing climate conditions are impacting the region and helps us preserve and protect irreplaceable natural and cultural heritage.”

However, the team managed to fit 56 dives within that period. The divers utilized suits heated by warm water poured from the surface, which allowed each dive to last around two hours.

Later in September, archaeological research operations began. The team completed 56 individual dives over the course of 11 days. Divers recovered an embossed leather folio, an eyeglass lens and a lieutenant’s epaulets, along with plates, serving dishes, platters and more. [ed: One might think September gets pretty cold in the Arctic - wouldn't July work better?]

The crew reported that the ship appears to have been left in fair condition, everything was organized with closed doors and drawers.

There were 275 objects found in all. The steward's pantry was a major area of attention over the summer, and a lot of the items recovered from there are pieces of stoneware dinnerware, such as plates and serving dishes.

Additionally, it wasn't until 2022 that archaeologists first opened the officers' cabins. They discovered a green box with drafting tools inside in 2nd Lt. Henry Thomas Dundas le Vesconte's chamber, where he worked as a mapmaker.

All recently found artifacts, according to Parks Canada, are jointly owned by the Canadian government and the Inuit as part of their ongoing casework cooperation.

Parks Canada's Ottawa lab is currently studying and conserving all 275 artifacts. Only a small portion of Erebus's area has been studied by researchers and they are yet to excavate Terror.

We gotta believe that water up there is really really cold! We know there will be more on these discoveries, but most likely not until next year. Stay tuned!

Posted by Maritime Maunder at 9:01 AM