Can you believe that January is more than half done? My goodness, where does the time go?! And further to that thought, I notice that we are a day or two late posting this issue of Maritime Maunder, for which there is no reason other than lethargy. So no apology! But on a more uplifting note, we have now passed 143,000 readers! We continue to amazed! This week's offering comes from Live Science (on line magazine) filled with all kinds of interesting information much of which deals with the "natural" world.

Timbers from the hull of a 16th-century ship have been found in a flooded quarry in southeastern England.

Much of the wooden hull of a rare Elizabethan-era ship has been found in a flooded quarry in southeast England, hundreds of yards from the nearest coast.

Few vessels from this time have survived, so an analysis of the find may shed new light on a key period in seafaring, when the country rapidly expanded its trading links throughout Europe through its control of the English Channel.

"To find a late-16th-century ship preserved in the sediment of a quarry was an unexpected but very welcome find indeed," said Andrea Hamel  a marine archaeologist for Wessex Archaeology, which investigated the discovery on behalf of Historic England, a government agency dedicated to historical preservation.

Much of the wooden hull of a rare Elizabethan-era ship has been found in a flooded quarry in southeast England, hundreds of yards from the nearest coast.

"The ship has the potential to tell us so much about a period where we have little surviving evidence of shipbuilding, but yet was such a great period of change in ship construction and seafaring," she said in a statement from Wessex Archaeology.

The remains of the ship were found in April in a flooded quarry being dredged for gravel on the Dungeness headland in Kent, about 60 miles (100 kilometers) southeast of London.

Workers from the quarry firm CEMEX reported the discovery to local government officials, who then contacted Historic England to arrange specialist support and emergency funding to recover the remains, according to the statement.

The quarry site now lies about 1,000 feet (300 meters) from the nearest coast, but archaeologists think that the site formed part of the coastline in the 16th century and that the ship may have been abandoned there after it was wrecked on the rocky headland or discarded after it was no longer seaworthy.

The vessel has not been identified, but dendrochronological analysis of more than 100 timbers from the hull — based on the patterns of tree growth rings — show it was built from trees of English oak (Quercus robur) felled between 1558 and 1580.

According to the Wessex Archaeology researchers, that date estimate places the ship during a transitional period in shipbuilding in northern Europe, when the traditional "clinker" construction of overlapping hull planks was replaced by the stronger but heavier "carvel" construction developed in the Mediterranean, which used flush hull planks nailed to an internal frame. 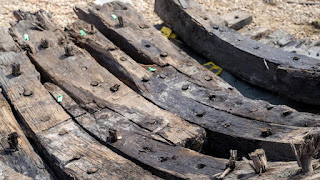 The remains of the ship found at Dungeness had this newer carvel type of construction, and its introduction led to much heavier ships than had been built before, including those that would explore the Atlantic coastline of the New World in later decades, the researchers said.

Wood quickly rots away in both air and water, and it usually lasts only a few years unless it is protected by an anaerobic layer of sediment — that is, a layer that protects it from oxygen. That means the wrecks of very few old wooden ships have survived to be found. And in the case of the Dungeness ship, the remaining hull timbers may have been covered by an anaerobic layer of silt beneath the floor of the quarry lake.

"The remains of this ship are really significant, helping us to understand not only the vessel itself but the wider landscape of shipbuilding and trade in this dynamic period," Antony Firth, head of marine heritage strategy at Historic England, said in the statement.

Using laser scanning and digital photographs, archaeologists are documenting what's left of the ship, and when the analysis is finished, the timbers will be carefully reburied in the quarry lake so they can continue to be protected by the silt layer. [ed:interesting that they will not preserve it in a museum there for other people to see]

We have noticed that more and more wrecks, sunken and otherwise, have been being discovered/found/uncovered in recent times, giving today's scientists a more in-depth look into history and ship building. With greater access and more advanced technology, there are bound to be many more exciting discoveries in the future. Stay tuned!

Posted by Maritime Maunder at 1:07 PM