26 June 2022: Well, as promised, here we are again with part two of the military ships post. We will pick up after the War of 1812 where,if you recall, we mentioned the Peacock capturing an East Indiaman as the final action of the war. Still from the same source, we will now have a look at the next chapter, moving through the Civil and Spanish American Wars. Please recall that the prefix "USS" was not in general use until 1905, so most of the ships shown here would have have been known as the "USS... whatever!"

The USS Sea Gull [ed: I never knew we had a ship named "Seagull" - not very warlike.] holds the distinction of being the first steam-powered U.S. fighting vessel to see active combat. It spent much of its time in the 1820s fighting pirates that had spent years robbing, sinking, and capturing ships and terrorizing, enslaving, and killing American crews. These maritime ruffians, however, were not the Barbary corsairs of the previous generation—the Sea Gull played a prominent role in the Navy’s campaign to eliminate the dreaded pirates of the Caribbean.


By the 1840s, the United States had dedicated part of its naval fleet to disrupting the illegal Atlantic slave trade decades after America banned the importation of African captives in 1807. The USS Jamestown was one of the most prominent ships in the Navy’s newly formed Africa Squadron. The sloop-of-war captured two slave ships during its time on the mission, which was hampered by the fact that the Navy’s top commander was an ardent pro-slavery Southerner.

Commodore Matthew Perry’s flagship of the West Indies Squadron, the Navy steamer USS Mississippi was one of the most significant vessels of the Mexican-American War in the late 1840s. It took part in several key battles, particularly the decisive Battle of Veracruz, which enabled the Americans to march on Mexico city—Veracruz stands as the Navy’s first major amphibious assault. It later sailed to Japan as part of a mission to convince the secluded nation to normalize relations with the West after three centuries of isolation, which Japan agreed to do after witnessing Perry’s awesome fleet of powerful, modern ships.MIS

In 1861, the Civil War was raging when the Confederacy captured the USS Merrimack—the former flagship of the Navy’s Pacific Fleet—which was undergoing repairs in Virginia when the war broke out. A year later, the rebels rechristened it the Confederate States Ship (CSS) Virginia and outfitted it with powerful guns and heavy armor plating above the waterline. It would soon square off with a Yankee ship in a battle on the Chesapeake that would change naval warfare forever.


Just three days after setting sail from Brooklyn, New York, in 1862, the iron-clad, steam-powered USS Monitor stormed into the Chesapeake Bay to protect the Navy’s wooden fleet from the approaching CSS Virginia, which had already sunk several ships en route. They engaged each other at the Battle of Hampton Roads, with both ships bouncing cannonballs off the armored hulls of the other until they both ran out of shells and withdrew in a stalemate. Although the first battle of the ironclads was not consequential, the moment in history was—the confrontation signaled the end of the era of wooden warships as both North and South raced to build newer, better armored vessels.

The arrival of the Monitor and the Merrimack/Virginia changed the face of naval warfare on the water, but the H.L. Hunley revolutionized maritime combat beneath it. Embodying both the potential and the risks of underwater warfare, the experimental Confederate ship Hunley was the first successful combat submarine in history. On February 17, 1864, the cramped and hand-crank-propelled vessel made history when it sank the Navy sloop-of-war USS Housatonic—and itself—with a primitive torpedo.

Just a few short months after it was commissioned in 1864, a monitor-class armored warship called the USS Tecumseh was sunk by the enemy, like so many other vessels during the Civil War. What makes the event historically important is why it sank—the Tecumseh had the misfortune of running into a terrifying new weapon: a naval mine. Cheap, simple, and devastating, sea mines remain the #1 threat to U.S. Navy vessels to this day.

The CSS David was a partially submersible Confederate vessel that was technically a surface ship but that functioned as a submarine. It used spar torpedos—long poles with bombs on the end, essentially—to silently affix explosives to the hulls of wooden ships, which it did with the Navy vessel USS New Ironsides. The attack didn’t do any real damage to New Ironsides, and the David rendered itself useless in the process, but the moment gave birth to naval torpedo warfare.

The CSS Shenandoah was still terrorizing Yankee whaling ships in the Pacific Ocean several months after the Confederacy surrendered before its captain was informed that the Civil War had ended—the Shenandoah fired the last shots of America’s bloodiest conflict in the summer of 1865.

The moment signaled not only the end of the Civil War but the end of the “Old Navy” era of American military history. Between 1865-1882, the Navy went into a long period of decline from being the second-largest seaborne force in the world behind only the British Empire to an impotent organization in charge of only a few dozen vessels in 1880.

The 1882 launch of the USS Puritan represented an American awakening to the sorry state of its naval forces and the beginning of a mad scramble to catch up before the world passed it by. The rebirth of the U.S. Navy was spurred by the 1873 Virginius Affair, a tense diplomatic standoff that occurred after the Spanish captured the American ship Virginius in Cuba and executed some of its crew. Although the Spanish Navy was a shell of its former self, it became clear to the American military that the hollowed-out U.S. Navy couldn’t answer the Spanish threat or effectively project power overseas.

The “New Navy” era, which would culminate with the U.S. Navy emerging in 1945 as the world’s largest and most potent maritime force, began in 1885 with the launch of the USS Chicago. The largest of the original three protected cruisers authorized by Congress at the start of the “New Navy” initiative, its commission represented a sea change in sea warfare. Signaling the end of the iron age of naval combat, the USS Chicago was one of the Navy’s first four steel ships.

In 1892, the United States Navy commissioned the first modern battleship in American history—the USS Texas. Although it took so long to build it was already outdated by the time it was finished, it—along with the armored cruiser USS Maine, commissioned just one month later—represented a great leap forward in naval engineering and capability. 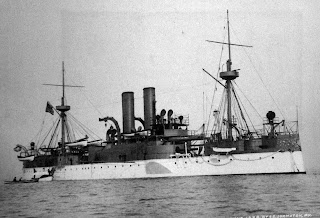 The simmering tensions between the United States and Spain came to a boil on February 15, 1898, when the USS Maine exploded and sank in Havana Harbor. Although it’s now known that the sinking was almost certainly the result of an internal explosion, it was presumed at the time that Spain was the culprit and the moment served as the catalyst for the Spanish-American War.

OK, we'll stop here for this week and hopefully, in the next issue, we'll finish the subject. American Independence Day looms, so the next issue may be delayed a day or two.

Posted by Maritime Maunder at 12:04 PM