5 April 2022: The wreck of the whaleship Industry has been found in the Gulf of Mexico (off New Orleans) and has revealed a host of interesting facts about the whaling business and the crews who manned the ship. From The Center Daily Times (online):

A nearly two-century old shipwreck found in the Gulf of Mexico off Louisiana is being hailed as a rare and highly prized artifact of forgotten African American history. Named the Industry, the two-masted wooden brig was a whaling ship crewed largely by freed descendants of slaves and Native Americans, two races seldom highlighted in the adventure tales tied to New England’s 18th and 19th century whaling industry. The wreck was discovered 3,000 feet down, during a February expedition that partnered NOAA Ocean Exploration with SEARCH Inc. and the U.S. Bureau of Ocean Energy Management (BOEM). So prized is the site that plans are underway to nominate it for the National Register of Historic Places — a move historians hope will help earn Black whalers the same attention being afforded Black cowboys and Buffalo soldiers (Black infantry and cavalry regiments). James Delgado of SEARCH Inc. notes the Black whalers who served on ships such as the Industry lived in two worlds: Free at sea, but still potential property on land.

“If the Black crewmen had tried to go ashore, they would have been jailed under local laws,” Delgado said in a news release. “And if they could not pay for their keep while in prison, they would have been sold into slavery.” Yet they not only persevered, but they also thrived in “America’s first global industry,” he says.

The wreck of the Industry is rare on many fronts, including being the only known whaling ship that went down in the Gulf of Mexico from the 1780s into the 1870s, historians say.

It set sail in 1815 from Westport, Massachusetts, and records show the crew hunted primarily sperm whale in the Atlantic, Caribbean and Gulf of Mexico, NOAA’s expedition report says. The ship met its demise May 26, 1836, about “70 miles off the mouth of the Mississippi River,” when a strong storm “snapped its masts and opened its hull to the sea,” historians says. Its crew abandoned ship, but the Industry was “caught in a loop of current” and stubbornly refused to sink. The ghost ship was still afloat when the whaling schooner Harmony crossed its path June 3, and sent men to board. They found no crew, but salvaged 200 to 300 barrels of whale oil, records show. The fate of the crew was long a mystery, with some historians speculating they purposely avoided paddling to shore out of fear of being enslaved, according to a report co-authored by Delgado, Michael L. Brennan of SEARCH Inc, and Scott Sorset of BOEM. If that’s true, the risk paid off. Recent research done by Robin Winters, a librarian at the Westport Free Public Library, found documents that report the crew was picked up at sea by another Westport whaling ship, the Elizabeth, and it brought them home, according to the expedition report. Names of those who were aboard the Industry on its final voyage were lost when the ship sank, but “lists of crews from previous voyages describe crew members and officers as including Black people, Native Americans, White people and multiracial people,” NOAA reports.

The Industry was 64 feet long and 18 feet wide, and little but an outline can be seen above the sand after 207 years.

NOAA Ocean Exploration made the discovery Feb. 25, using a remotely operated vehicle (ROV) that circled the wreck site for about two hours, recording video and taking photos for study. It was the discovery of a 19th century stove that gave a first clue the ocean-floor “anomaly” — first reported in 2011 — was likely a whaling ship. The stove appeared to be a trywork, a type of cast-iron furnace used in rendering whale blubber to oil. Bricks found around the trywork “formed a fire-resistant hearth” that kept it from setting fire to the deck. Bottles were also found, some still intact. “One anchor is missing, and the wreck has few visible portable artifacts,” the expedition report says. “One cask’s outline was spotted in the silt, along with the anchors, which are out of place as they are not at the bow, and the minute glass. While some artifacts are doubtless obscured or buried in the silt, this is a strikingly empty wreck.” 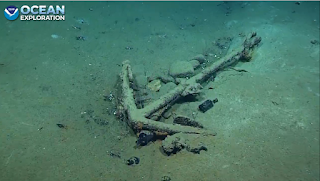 The lack of artifacts was seen as even more proof the team had found the Industry. Crew members likely took as much as they could carry when they abandoned the ship, historians say. Then even more was salvaged by the Elizabeth when it boarded the sinking ship. It’s also possible many items The Industry’s wreckage is a haunting reminder of their forgotten achievements as captains and crew members, NOAA Administrator Rick Spinrad said in a release. “The discovery reflects how African Americans and Native Americans prospered in the ocean economy despite facing discrimination and other injustices,” he said. James Delgado believes the Industry is of both national and international significance, with a story to tell about whaling and maritime culture. It’s with that in mind that a team is working to get the site on the National Register of Historic Places, a process that will likely take three or four years. “Black and Native American history is American history, and this critical discovery serves as an important reminder of the vast contributions Black and Native Americans have made to our country,” U.S. Deputy Secretary of Commerce Don Graves said in a release about the wreck discovery. “This 19th century whaling ship will help us learn about the lives of the Black and Native American mariners and their communities, as well as the immense challenges they faced on land and at sea.”

Interesting story, and to our knowledge, this would be the only (or one of the few) barely visible site nominated for the National Register!

Posted by Maritime Maunder at 11:20 AM