6 March 2022: Last week, we posted about a Revolutionary War wreck discovered in the murky Savannah River. Continuing (kind of) in that vein, we noticed this piece in the Detroit Free Press which offers a video that is one of the best we have seen of a relatively pristine wreck - not surprising considering the depth and the water temperature!

After searching more than 2,500 miles of the bottom of Lake Superior, the Atlanta — a 172-foot schooner-barge that sank during a terrible storm — has been found, preserved in the icy water just as it was when it went down more than 130 years ago.

Even the gold letters of the ship's nameplate are still visible.

"It is truly ornate and still beautiful," Bruce Lynn, executive director of the Great Lakes Shipwreck Historical Society, said. "It is rare that we find a shipwreck that so clearly announces what it is and the nameboard of the Atlanta really stands out."

The discovery, which the society announced this week, solves another mystery of what happened to hundreds of vessels swallowed by the lake and offers historians a window into the past.

The shipwreck is sitting 650 feet below Lake Superior's surface, about 35 miles away from Deer Park in Luce County in the Upper Peninsula.

In that depth, which is beyond what a human diver and sunlight can reach, the water is in the low to mid-30s, a temperature that preserves shipwrecks.

It gives you a sense of what it was like to travel on the Great Lakes during dangerous conditions, before the Coast Guard and modern technology to predict the weather, communicate with others and navigate.

And society spokesman Corey Adkins said the discovery may also give descendants of the crew that didn't survive some peace.

"Their stories," he added, "don't deserve, for lack of a better term, to get washed away."

There are more than 6,000 Great Lakes shipwrecks, which have taken the lives of 30,000 mariners, according to the society. Of those, there are about 550 wrecks — most of which are undiscovered — in Lake Superior.

The society also has a shipwreck museum at Whitefish Point.

To find the shipwreck, more than 2,500 miles of Lake Superior were mapped by the society last summer with Marine Sonic Technology using side-scan sonar, a sonar system for detecting and imaging objects on the seafloor.

In this case, it detected the Atlanta.

Its home port was Port Huron, and it was bound [ed: where?] with a load of coal in tow of the steamer Wilhelm when both vessels got caught in a northwest gale. In the storm, the towline winch [ed:more likely the towline itself rather than the winch] snapped. The crew took to the lifeboat.

They pulled at the oars for hours and eventually came within site [ed:"sight?"] of the Crisp Point Life-Saving Station. But, while attempting to land, the boat overturned — twice — and only two men made it safely to the beach.

The survivors said all three masts broke off during the storm, and video from a remote operated vehicle confirmed that account.

click here for great video: dive video of wreck   [ed: there is sound]

All three masts broke off flush with the deck and the hull is starting to split. 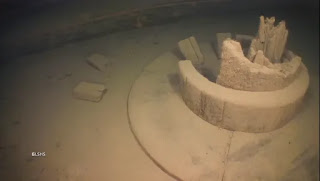 "It was tough out there for them," Adkins said. "If anyone is seeing this, reading this, and you are one of the family members — a great- and great-great grandchild of the crew — contact us."

That video is amazingly clear and detailed. Icy cold fresh water will frequently provide those conditions. [And apologies for the authors lack of nautical expertise!]

We will not be posting next week as your 'umble scribe will be navigating the mighty Mississippi River and will be kind of out of wifi reach - and won't be lugging a computer in any case. So, we'll sign off with

see you in two weeks!

Posted by Maritime Maunder at 10:58 AM