SAVED BY A POEM

18 September 2021: This past week (in 1830), a graduate medical student who was also studying Law at Harvard wrote a famous poem which is credited with raising the awareness for what he perceived as a great tragedy: the scrapping of the U.S. Frigate (later U.S.S.) Constitution. The ship had been commissioned in 1797, played a role in the Barbary Wars (1804-5) and won her fame and nickname Old Ironsides in the War of 1812. Oliver Wendell Holmes came home from college, learned of the looming disaster and penned a poem which he submitted to the Newspaper. It continues to occupy a prominent place in the minds of the fans of "America's Ship of State." The ship would have been stripped of anything useful and disassembled in a ship breaker's yard - essentially thrown away like so much garbage. Other voices joined his cry and the Navy scrapped the idea instead of the ship. And this poem is credited (mostly) with saving the ship for future generations. 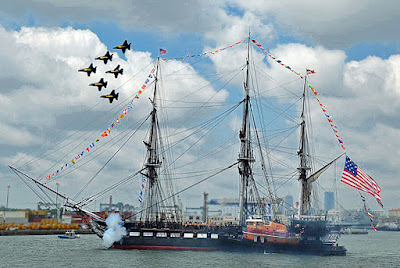 USS Constitution celebrating the bicentennial of the War of   1812 with the Blue Angels in Boston Harbor, 2012.

And a big thank you to Oliver Wendell Holmes for his prescience and poetic abilities!

Posted by Maritime Maunder at 12:54 PM