12 June 2021: This story has made the rounds this week on many news media sites but we couldn't not post it, just based on the amazing tale it tells. The following is an amalgam from several sources, including the AP and Fox News.

It was sunny and clear on Friday morning and the water was calm off the coast of Provincetown, Mass., where Michael Packard was diving for lobsters.

His longtime fishing partner, Josiah Mayo, was following him in their fishing vessel, the J&J, tracking him through the bubbles that rose from Mr. Packard’s breathing gear to the surface of the water.

The men had already caught 100 pounds of lobster, and Mr. Packard was about 40 feet underwater, looking for more.

Suddenly, the bubbles stopped, Mr. Mayo said. Then, the water began to churn violently. A creature breached the surface and for an agonizing split second, Mr. Mayo thought it was a white shark.

“I immediately thought it was the shark encounter that we’d unfortunately been preparing for for years,” he said in an interview on Saturday.

Then, he saw the fluke and the head of a whale. Moments later, he saw Mr. Packard fly out of the water.

“‘It tried to eat me,’” Mr. Packard sputtered, according to Mr. Mayo. The whale, a humpback, swam away as Mr. Mayo and another fisherman helped Mr. Packard back into the boat.

Such terrifying encounters are virtually unheard-of, according to Charles Mayo, Josiah Mayo’s father and a senior scientist at the Center for Coastal Studies in Provincetown, a town of about 3,000 people on the tip of Cape Cod. There is an account of a woman who was pulled down by a pilot whale. There are reports of sperm whales that were harpooned and then attacked. And in 1896, The New York Times reported the implausible tale of a whaler who was found in the belly of a whale in October 1891 and rescued alive.[ed: hmmm]

“I’ve never heard of that ever happening,” Dr. Mayo said of Mr. Packard’s ordeal. Still, the encounter is explainable, he said. 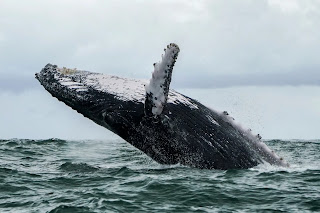 The whale, possibly a 32- to 35-foot juvenile that had previously been seen swimming in the area, was most likely diving for food when it inadvertently caught Mr. Packard in its enormous mouth.

Humpback whales spend much of their time in that part of New England, searching for and engulfing small schooling fish, said Jooke Robbins, director of the humpback whale studies program at the Center for Coastal Studies.

They lunge fast, open their mouths and use baleen plates to “filter” the water out before swallowing the fish, Dr. Robbins said in a statement.

When the whale realized it had caught something that was not its typical prey — in this case, an unsuspecting lobsterman — it responded the way a human who accidentally ingested a fly would, Dr. Mayo said.

“We certainly don’t eat anymore,” he said. “We spit the food out, and some of us would leave the restaurant.”

"All of a sudden, I felt this huge shove and the next thing I knew it was completely black," Packard recalled Friday afternoon, according to the Cape Cod Times. "I could sense I was moving, and I could feel the whale squeezing with the muscles in his mouth."

"I was completely inside (the whale); it was completely black," he added. "I thought to myself, ‘there’s no way I’m getting out of here. I’m done, I’m dead. All I could think of was my boys, they’re 12 and 15 years old." 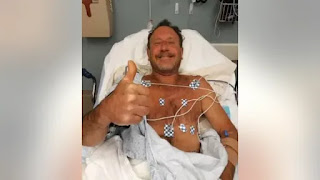 Packard said he thinks he was in the whale's mouth for about 30 seconds. He was able to breathe because he still had his breathing apparatus.

In an effort to save himself, Packard said he began shaking the whale's head before the animal surfaced and ejected him. In a Facebook post, he said the whale "spit me out" and that he escaped with bruises and no broken bones.

Packard's mate, Josiah Mayo, plucked him out of the water and headed back to shore.

Experts told the newspaper that humpback whales are not aggressive animals, especially toward humans.

"Based on what was described this would have to be a mistake and an accident on the part of the humpback," said Jooke Robbins, director of Humpback Whale Studies at the Center for Coastal Studies in Provincetown.

Probably no one will have a story like that to tell. We suspect he likely wont have to buy a drink for himself for a long time! Well done, Mike!

See you all next week!

Posted by Maritime Maunder at 1:32 PM