4 June 2021: OK maybe the title of this post is a trifle misleading; we're not talking about the Flying Dutchman or the Mary Celeste or any of the other mythical and real ships which plied the oceans of the world with no crews. But we are talking about a ship - two actually - plying the oceans with no crews aboard and successfully negotiating such things as the Panama Canal, unmanned. The following from US Naval Institute:

An experimental unmanned surface vehicle has transited the Panama Canal on the way to its new home in California, USNI News has learned.

Nomad, a former offshore patrol vessel retrofitted with systems to allow the ship to operate autonomously, passed through the Panama Canal this week, according to ship spotters tracking data from Marine Traffic.com. A Navy official also confirmed the transit. 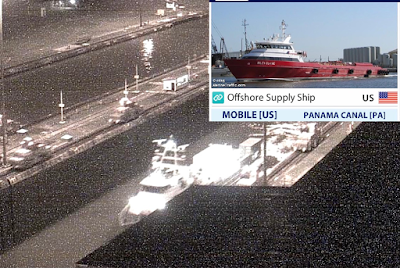 A spokesperson for Naval Surface Forces Pacific referred USNI News to the Office of the Secretary of Defense’s Strategic Capabilities Office when reached on Tuesday. A SCO spokesman acknowledged a request for additional information from USNI News but did not provide comment.

Based near the Austal USA shipyard in Mobile, Ala., Nomad was underway extensively in the Gulf Coast and traveled as far away as Norfolk, Va., for its testing program, according to ship spotters.

Nomad, formerly known as Riley Claire, is one of two known ships SCO created for its Ghost Fleet Overlord experimentation program to test the viability of at-sea autonomous ships.

SCO contracted with Gibbs & Cox and L3 ASV Global in 2018 to convert one craft each into unmanned prototypes. The Pentagon used special contracting rules to prevent disclosure of the contractors and the cost of the Overlord program.

The other known Overlord ship, Ranger, completed its own transit to California late last year.

“During this voyage, the vessel traveled over 4,700 nautical miles, 97 percent of which was in autonomous mode — a record for the program. Ghost Fleet Overlord will continue fleet experimentation to inform the Navy’s unmanned concept development,” Pentagon spokesman Cmdr. Josh Frey told USNI News at the time.

The Sea Hunters and the Overlord vessels were transferred to the SURFDEVRON to act as test beds for the Navy to craft a concept of operations for unmanned surface vessels – which the service has argued will be a key component of the future fleet.

Earlier this year, the Navy held its first major exercise utilizing unmanned ships and aircraft along with crewed ships and planes as a proof of concept.

Amazing stuff! And could well the be solution to the Navy's continuing manning issues with not enough people to properly man the fleet. Satellite and radio control offer huge possibilities! I wonder if they're subject to jamming by folks who don't like us?

As a matter of interest (mostly to us here at Maritime Maunder) we are now at 122,300 readers! We continue to be humbled and astonished at the growing number of folks who enjoy (hopefully) what we post. Thank you all.

Posted by Maritime Maunder at 1:22 PM