YOUR TAX DOLLARS AT WORK (U.S.)

24 April 2021: Noticed this article in a publication (on line) called 1945 written by some former military types about stuff - both Navy and Army - that is not widely known. Thought this one interesting, considering the problems the Navy has had with USS Zumwalt - the first stealth destroyer.

A key plot element of the 1997 James Bond film Tomorrow Never Dies involved media baron Elliot Carver (Jonathan Pryce) using a stealth ship to destroy a Royal Navy frigate to almost start World War III. While it seems like extreme lengths to go to gain broadcasting rights in China, one part of the story wasn’t a work of fiction.

The U.S. Navy actually did build an experimental stealth ship that resembles the fictional super villain’s vessel. However, while the fictional Sea Dolphin II was supposed to be massive – large enough that a Bond-style fight sequence could take place within the hull involving dozens of henchmen – the real world Sea Shadow (IX-529) was just 165 feet long and had a crew of just four.

Development of the real-world version began in 1978 when the Lockheed Martin “Skunk Works” sought to extend stealth capabilities to submarines, yet it wasn’t until 1993 that the low signature warship was made public. The program drew inspiration from the F-117 stealth aircraft. According to Lockheed Martin, “The initial design consisted of a cigar-shaped hull that was shielded by an outer wall of flat, angular surfaces.”

It was found that those angular surfaces could actually bounce sonar signals away and also muffle the engine sounds and the internal noises of crewmen inside the vessel. The Skunk Works team subsequently ran numerous acoustical tests in special sound-measuring facilities and obtained dramatic improvements.

However, the Department of Defense (DoD) actually didn’t show interest in this type of investigation until Ben Rich, the head of the Skunk Works office, adapted the idea for use with surface ships. That led to a Defense Advanced Research Projects Agency (DARPA) contract to apply stealth concepts and materials to surface vessels and to test the effects of seawater on radar-absorbing materials.

The Sea Shadow was developed in great secrecy – and while it may have been a “stealth ship” it wasn’t in fact invisible to the naked eye. In fact, with its unique Small Waterplane Area Twin Hull (SWATH) design, which gave it a catamaran-type shape, it would be hard to miss. It was thus assembled out of sight within a submersible barge in Redwood City, California. 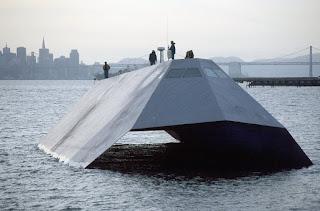 Unlike the fictional Sea Dolphin II, which was worthy of a Bond villain’s super weapon, the Sea Shadow wasn’t actually that large. But it also only required a crew of four that consisted of a commander, helmsman, navigator and engineer.

Its first trials in 1981 could be described as underwhelming. The ship’s wake was unexpectedly huge and thus detectable with sonar and from the air. The problem was discovered to be from the motor propellers, which had been installed backwards. [ed: there's a surprise!] After addressing the issue, the project moved forward and the vessel was completed in 1984. It subsequently underwent night trials in 1985 and 1986, but the Sea Shadow never advanced beyond the testing phase.

Some of what was learned in the testing were applied to other naval technology include submarine periscopes, while the lessons learned also were applied to new Navy warships, notably the DDG 1000 Zumwalt-class.

Finally, in 1993, the public was given a view of the experimental stealth ship – and it likely inspired the Bond filmmakers. The U.S. Navy offered Sea Shadow for sale in 2006, but apparently garnered little interest, not even from a would-be supervillain.[ed: well at least they got some new technology out of it]


One issue with the sale was that the buyer couldn’t sail the ship and could only scrap it. [ed: why do you suppose that was?] Why it wasn’t offered to a museum or other institution isn’t clear, but likely it was an issue of the technology on board. Sea Shadow was finally sold for scrap in 2012… or at least that is what a potential villain would have you believe.[ed: hmmmm]

So, maybe not  complete waste of tax payer dollars as the Zumwalt class was most likely a direct result of the technology Skunk Works at Lockheed Martin developed.

Posted by Maritime Maunder at 9:40 AM