9 April 2021: A recent news article in a Rhode Island newspaper caught my attention as it seems to have offered some answers about what happened to a really famous pirate that no one ever heard of. Henry Every, also known as Avery. The following from several research sources:

First, a little back story on the man:

Dubbed "The Arch Pirate" and "The King of Pirates" by contemporaries, Every was infamous for being one of few major pirate captains to escape with his loot without being arrested or killed in battle, and for being the perpetrator of what has been called the most profitable act of piracy in history. Although Every's career as a pirate lasted only two years, his exploits captured the public's imagination, inspired others to take up piracy, and spawned works of literature.

Every began his pirate career while he was first mate aboard the warship Charles II. As the ship lay anchored in the northern Spanish harbour of Corunna, the crew grew discontented as Spain failed to deliver a letter of marque and Charles II's owners failed to pay their wages, and they mutinied. Charles II was renamed the Fancy and Every elected as the new captain. Every's most famous raid was on a 25-ship convoy of Grand Mughal vessels making the annual pilgrimage to Mecca, including the treasure-laden Ghanjah dhow Ganj-i-sawai and its escort, Fateh Muhammed. Joining forces with several pirate vessels, Every found himself in command of a small pirate squadron, and they were able to capture up to £600,000 in precious metals and jewels, equivalent to around £91.9 million in 2021, making him the richest pirate in the world. This caused considerable damage to England's fragile relations with the Mughals, and a c
ombined bounty of £1,000—an immense sum at the time—was offered by the Privy Council and the East India Company for his capture, leading to the first worldwide manhunt in recorded history.

Although a number of his crew were subsequently arrested, Every himself eluded capture, vanishing from all records in 1696; his whereabouts and activities after this period are unknown. Unconfirmed accounts state he may have changed his name and retired, quietly living out the rest of his life in either Britain or on an unidentified tropical island, while alternative accounts consider Every may have squandered his riches. He is considered to have died sometime between 1699 and 1714; his treasure has never been recovered.

And now, the recent discovery:

A few Arabian coins unearthed in a Rhode Island fruit orchard may have solved a cold case dating back to the 1600s.

The coins are among the oldest ever found in the United States and were discovered by an amateur historian and metal detector enthusiast.

And they could finally explain the disappearance of English pirate captain Henry Every.

“It’s a new history of a nearly perfect crime,” said Jim Bailey, who found some of the coins. 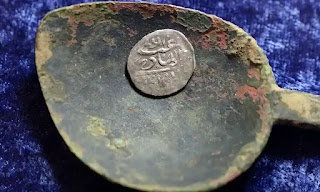 Every became the world’s most wanted man in 1695 when his ship, the Fancy, attacked and raided a boat carrying Muslim pilgrims home to India from Mecca, Saudi Arabia.

The Ganj-i-Sawai was a royal vessel owned by the Indian emperor Aurangzeb, then one of the world’s most powerful men, and it was carrying tens of millions of dollars worth of gold and silver.

After murdering the crew and raping the women onboard, Every and his crew escaped to the Bahamas with a large bounty placed on their heads by King William III.

Until the find historians only knew for certain that Every sailed to Ireland in 1696, but Mr Bailey says that the coins are proof that the hunted pirate and his crew eventually made their way to New England

Mr Bailey unearthed the first coin, which was minted in Yemen in 1693, back in 2014 and now he and other enthusiasts have found 15 more.

Ten of those coins were discovered in Massachusetts, three in Rhode Island, and two in Connecticut.

Another coin was also found in North Carolina, where the crew are believed to have come ashore.

“It seems like some of his crew were able to settle in New England and integrate,” said Sarah Sportman, the state archaeologist for Connecticut.

Interesting tale and must have been quite a thrill for Mr. Bailey, when he understood what he had found!

Posted by Maritime Maunder at 9:37 AM