WHAT A WEEK (HISTORICALLY SPEAKING!)

18 September 2020: What a week we are finishing up (and no, not yet another 2020 disaster!). Rather, this one is, historically speaking, all good news! So without further ado (as the writers are wont to say) let's jump right in.

Last Monday,  14th September, was the 206th anniversary of the conclusion of the Battle of Baltimore. You may recall hearing, perhaps in a history class, that after the British basically captured and burned many buildings in our capital, Washington D.C., they left and sailed up the Chesapeake Bay to offer Baltimore the same treatment in the hope that a dispirited nation would throw in the towel (so to speak) and quit the war. Well, the folks in Baltimore had other ideas and ferociously defended their city both ashore on North Point and in the harbor at Fort McHenry. So, on the morning of 14 September 1814 following 25 hours of bombardment and sharp fighting ashore on North Point, the British admiral, Alexander Cochrane realized he could not win and withdrew, not only from the Baltimore Harbor, but from the Chesapeake itself. His fleet sailed to Jamaica where they planned their next incursion (into New Orleans) which also ended poorly for them. 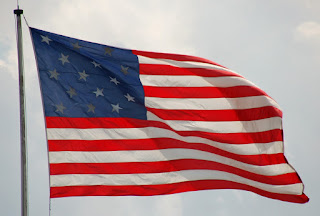 But the big take away from this story is the genesis of the American National Anthem, the Star Spangled Banner, which was penned by Francis Scott Key, a Baltimore lawyer who was aboard the British flagship, HMS Tonnant, to negotiate the release of Dr. Beane, an elderly medico who the British captured during their departure from Washington. He watched the bombardment of McHenry throughout the rainy night, struggling to see if the American flag still flew above the ramparts. Of course, as we know now, the sun came up, the sky cleared and the flag still flew. His joy was overwhelming and, using the tune to Anachreon in Heaven for his meter, composed a poem he titled "The Defense of M'Henry." He took it ashore and showed it to a few people and the rest is history (as they say). It was two days later that an actor sang it, calling the song "The Star Spangled Banner." It became the National Anthem in 1931.

The second big anniversary this week occurred two days ago, the 16th. In 1830,  a young Boston lawyer named Oliver Wendell Holmes wrote a poem which he sent to the local paper for publication. He had heard that the American frigate Constitution was to be scrapped and was outraged by the insensitivity of the politicians of the time who would take the most famous ship (at that time) of the navy and destroy her. His action stirred the populace and swayed the pols and the result sits today, afloat, in the historical Charles Town Navy Yard in Boston, now the American Ship of State. 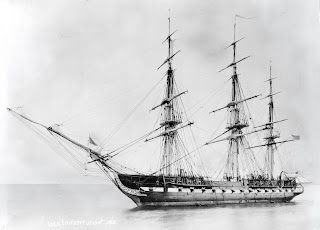 USS Constitution as she looked in 1931

Here is the poem he wrote that saved the ship!

Aye tear her tattered ensign down
Long has it waved on high,
And many an eye has danced to see
That banner in the sky;
Beneath it rung the battle shout,
And burst the cannon's roar;—
The meteor of the ocean air
Shall sweep the clouds no more.

Her deck, once red with heroes' blood,
Where knelt the vanquished foe,
When winds were hurrying o'er the flood,
And waves were white below,
No more shall feel the victor's tread,
Or know the conquered knee;—
The harpies of the shore shall pluck
The eagle of the sea!

Oh, better that her shattered hulk
Should sink beneath the wave;
Her thunders shook the mighty deep,
And there should be her grave;
Nail to the mast her holy flag,
Set every threadbare sail,
And give her to the god of storms,
The lightning and the gale!

And so she was saved and in 1931, made an epic round the world cruise before settling to her berth in Boston.

So, a big week for us historians, and worthy of note.

Posted by Maritime Maunder at 8:42 AM