10 September 2020: Two hundred seven years ago today - during the War of 1812 - the United States won a signal battle - the largest fleet action of the War - on Lake Erie. Commanded by Rhode Island native Oliver Hazzard Perry, the U.S fleet engaged the British in a sharp contest off Presque Isle, in Put-in-Bay, Ohio. Interestingly, all the ships in the fight were built on the lake by local craftsmen using locally sourced (mostly) materials. The day of the engagement went like this:


On the morning of 10 September, the Americans saw [British admiral] Barclay's vessels heading for them, and got under way from their anchorage at Put-in-Bay. The wind was light. Barclay initially held the weather gauge, but the wind shifted and allowed Perry to close and attack. Both squadrons were in line of battle, with their heaviest vessels near the centre of the line.
The first shot was fired, from HMS Detroit, at 11:45.[21] Perry hoped to get his two largest brigs, his flagship Lawrence and Niagara, into carronade range quickly, but in the light wind his vessels were making very little speed and Lawrence was battered by the assortment of long guns mounted in Detroit for at least 20 minutes before being able to reply effectively. When Lawrence was finally within carronade range at 12:45, her fire was not as effective as Perry hoped, her gunners apparently having overloaded the carronades with shot.[22]

Astern of Lawrence, Niagara, under Elliot, was slow to come into action and remained far out of effective carronade range. It is possible that Elliott was under orders to engage his opposite number, HMS Queen Charlotte, and that Niagara was obstructed by Caledonia, but Elliot's actions would become a matter of dispute between him and Perry for many years. Aboard Queen Charlotte, the British ship opposed to Niagara, the commander (Robert Finnis) and First Lieutenant were both killed. The next most senior officer, Lieutenant Irvine of the Provincial Marine, found that both Niagara and the American gunboats were far out of range, and passed the brig General Hunter to engage Lawrence at close range. 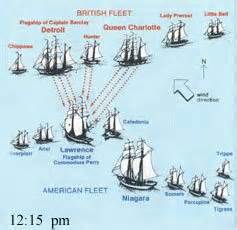 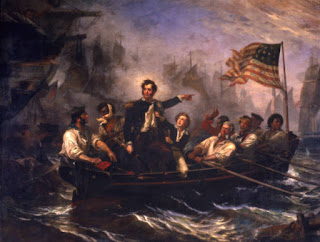 Although the American gunboats at the rear of the American line of battle steadily pounded the British ships in the centre of the action with raking shots from their long guns from a distance, Lawrence was reduced by the two British ships to a wreck. Four-fifths of Lawrence's crew were killed or wounded. Both of the fleet's surgeons were sick with "lake fever", (malaria),[23] so the wounded were taken care of by the assistant, Usher Parsons. When the last gun on Lawrence became unusable, Perry decided to transfer his flag. He was rowed a half-mile (1 km) through heavy gunfire to Niagara while Lawrence was surrendered. It is said his personal servant, African American sailor Cyrus Tiffany, accompanied and protected Perry during this journey.

(It was later alleged that Perry left Lawrence after the surrender, but he had actually taken down only his personal pennant, in blue bearing the motto, "Don't give up the ship".)
When Lawrence surrendered, firing died away briefly.[25] Detroit collided with Queen Charlotte, both ships being almost unmanageable with damaged rigging and almost every officer killed or severely wounded. Barclay was severely wounded and his first lieutenant was killed, leaving Lieutenant Inglis in command. Most of the smaller British vessels were also disabled and drifting to leeward.[26] The British nevertheless expected Niagara to lead the American schooners away in retreat.[27] Instead, once aboard Niagara, Perry dispatched Elliot to bring the schooners into closer action, while he steered Niagara at Barclay's damaged ships, helped by the strengthening wind.
Niagara broke through the British line ahead of Detroit and Queen Charlotte and luffed up to fire raking broadsides from ahead of them, while Caledonia and the American gunboats fired from astern. Although the crews of Detroit and Queen Charlotte managed to untangle the two ships[28] they could no longer offer any effective resistance. Both ships surrendered at about 3:00 pm. The smaller British vessels tried to flee but were overtaken and also surrendered.[29]
Although Perry won the battle on Niagara, he received the British surrender on the deck of the Lawrence.


Perry's vessels and prizes were anchored and hasty repairs were underway near West Sister Island when Perry composed his now famous message to Harrison. Scrawled in pencil on the back of an old envelope, Perry wrote:
Perry next sent the following message to the Secretary of the Navy, William Jones:

And so it was that O.H. Perry became immortalized by his great victory. It is worth noting, that the flag (the one he flew on Lawrence and transferred to Niagara) carried the words James Lawrence had uttered after his ill-fated (and fatal) meeting with HMS Shannon the year before. That same flag is now on display at the U.S. Naval Academy.