4 July 2020: Happy Independence Day to my American readers -wherever you might be! And while there will be very limited celebrations this year due the the corona virus restrictions on crowds and "social distancing" we still recognize the meaning and importance of this date.
We were planning on a new look at the Mallows Bay (Potomac River in Maryland) repository of abandoned WWI ships, but came across this piece from National Interest and thought it might be fun to offer. We'll address Mallows in a future post.
~~~~~~~~~~~~~

Much like the First World War era Lebedenko or “Tsar Tank,” the Novgorod is an excellent reminder of Imperial Russian military “out of the box” thinking that might have been better left in the box.
While Czar Peter the Great of Russia sought to “westernize” his nation, and this included adopting what were then modern military tactics, weapons and even uniforms, he also founded the Russian Navy. He oversaw the construction of Imperial Russia’s warships and even some sea fortresses.
However, even the forward-thinking Peter likely couldn't have envisioned something as truly revolutionary and completely Russian in design as the Novgorod, a monitor-style warship that was built for the Imperial Russian Navy in the 1870s. It goes down in the annals of naval history as one of the most unusual warships – and possibly the worst – ever built.
It was round.
The concept of a circular battleship actually wasn’t entirely Russian. The concept had first been considered by a Scottish shipbuilder named John Elder, which evolved under the Royal Navy's Edward Reed. It involved a shallow-draft vessel that was capable of traversing low-level waters such as rivers and lakes, where it could provide support to military units on land in a way more powerful warships of the era couldn't. 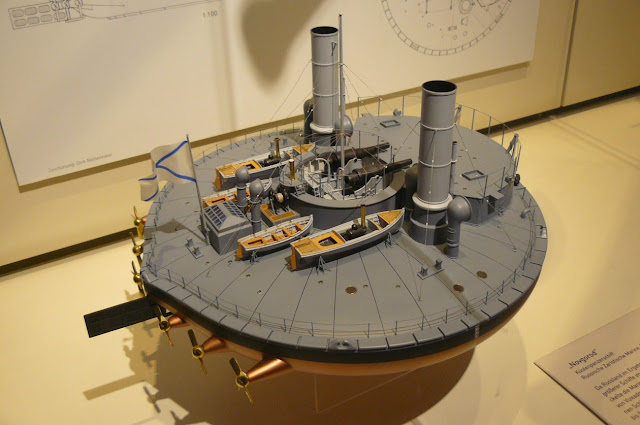 River monitors had seen use in the American Civil War, while the British used riverboats in Africa, notably the Sudan, which is why no one seriously took up the concept of a round monitor when the existing vessels did a very good job.
But there were other factors at play for the Russians. After the Treaty of Paris, which ended the Crimean War, Russia was no longer allowed to have a fleet in the Black Sea, while the country’s coffers were so depleted it couldn't have afforded one anyway! The treaty also prohibited Russia from establishing naval or military arsenals on the Black Sea coast.

Rather than leave Sevastopol undefended, Russian Admiral Andrei Popov proposed to build a circular ship for the coast defense of the port. The circular warship could carry super-large, but also super-heavy guns. In theory the idea was that large warships would roll when delivering a broadside, while a side with the same width and length would not have such a problem.
The circular design also allowed for more armoring, but it was far from as stable as Popov or its designers expected. In fact, in anything more than calm waters the accuracy of its main armament suffered greatly.
The Novgorod was laid down and then constructed at the New Admiralty Shipyard of Saint Petersburg from 1871 until 1874. It was envisioned to be the first of a new class of monitors to protect the Black Sea and Dnieper Rivers. As a circular warship it was classified as a floating fortress and not listed as a fleet vessel.
However, soon after construction began the restrictions were lifted, but Czar Alexander II opted to move forward with the project, and ordered the construction for 10 additional circular ships – the second to be called “Vitse-Admiral Popov.”

The round warships did indeed carry the most powerful weapons of their time, but the Novgorod was slow. It only finally saw action in the Russo-Turkish War (1877-1878) when she was stationed at Odessa to act as a floating deterrent. The round monitor was so slow that it couldn’t keep up with the inferior Turkish warships, and it was found that it was unable to fight away from the coast. If the battle didn’t come to the round monitor, the round monitor was unlikely to make it in time for a battle!

However, Czar Alexander II apparently still liked the design enough that when Popov proposed a round Imperial yacht the Emperor agreed! Called the “Livadia,” it was assembled in England and transported to Sevastopol for a sea trial. It eventually was used to transport coal rather than the Imperial family.
The two completed monitors remained in use following Czar Alexander II’s death, but for coastal defense. Both struck from the Naval Register in July 1903 and sold for scrap. Much like the First World War era Lebedenko or “Tsar Tank,” the Novgorod is an excellent reminder of Imperial Russian military “out of the box” thinking that might have been better left in the box.
~~~~~~~~~~~~~~

Remember, friends, sometimes fact is stranger than fiction! But at the same time, had it worked, our modern day navies might look a whole lot different!

Posted by Maritime Maunder at 9:11 AM