17 July 2020: On 6 December 1917, two ships, bound for the war in Europe and loaded with highly explosive munitions, collided. And exploded. The incident occurred in Halifax Harbor where a convoy was forming for the trip to the war. The resulting shock wave and fires leveled half of Halifax, NS, killed nearly 2,000 people and injured over 6,000. The property damage, as we might surmise, was monumental. The known images of the disaster show only the aftermath. Until now, there were no known pictures of the explosion. Now, perhaps there is: from the CBC we have the following:
~~~~~~~~~~~~~~~~~

"The photo has the look of a very troubling dream," Dan Conlin says as he studies an old black-and-white image. 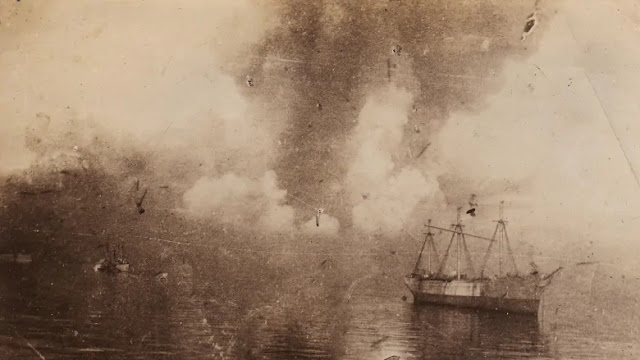 Conlin is a transportation historian who's spent a lifetime studying images of ships, trains and aircraft. He's also a former curator of Halifax's Maritime Museum of the Atlantic, which houses a large collection of materials from the 1917 Halifax Explosion.
The image he's studying surfaced recently on Reddit with a user from Halifax, England, wondering if it was a "new" image of the 1917 disaster. "You have these tranquil little wavelets in the foreground and some stately, anchored vessels — including a sailing ship," Conlin said. "But in the background there are these awful, nightmarish clouds, including a horrible column that is rising into the sky. It looks like a surreal nightmare."
When Conlin first looked at it, the crisp details of the foreground and the blurry background raised his skeptical eyebrows. "There was quite a tradition in the World War I era of faking photos by doing composite photos, where you layer one image on top of another," he said.
One well-known photo of the explosion taken from McNabs Island was later suspected to have been doctored by a company. They seem to have added clouds for dramatic effect — and to sell more postcards.

There is evidence this image of the Halifax Explosion was doctored to make it more dramatic, and to sell more copies of the postcard it was printed on. (Nova Scotia Archives)

But Conlin thinks in the nightmarish photo, it's more likely that the clouds are moving from the force of the explosion, while the ships were untroubled by any winds. The disaster killed nearly 2,000 people and badly hurt thousands more. It levelled the Richmond district in the north end.
"It's carnage and destruction out of Dante at the base of that cloud. People are dying and fires are starting and this awful event has hit Halifax in the distance," he said.
"That angry cloud gives you an idea of the violence and tragedy that is unfolding even as the shutter clicks. It's really rare and that photo, as far as I can tell, has never been published."
CBC sent the photo to Joel Zemel, who's written two books about the Halifax Explosion. He's studied hundreds of photos relating to the explosion and estimates fewer than 20 show the actual blast cloud. He's posted many of the known ones to his website.
"I haven't seen this one," he said.
He noted the clouds obscure the distance and it gives few clues as to where it was taken. The strange three-masted sailboat to the right seems out of place in the steam age, but could have been moored and hulked — that is, used as a floating warehouse.
The high angle limits where the photographer could be around the harbour. "One of the only vantage points that could take a photograph that high would be off HMCS Niobe, which was a depot ship in the harbour at the time."
The Niobe was anchored near what was then the Canadian naval college and today is CFB Stadacona. The explosion happened about 1.2 kilometres away, near today's Irving Shipyard.
~~~~~~~~~~

That image sure looks real to us, but were it faked, that would be the idea! We will take it as the real deal, since it appears no one today would gain anything from "finding" it now.

Posted by Maritime Maunder at 7:34 AM