Oil tanker Willowy was on its course to its next destination on May 31 when senior officers aboard it were called to the bridge as it turns out, their ship, along with four other vessels in the vicinity, had all started to sail in circles and were about to converge.
In a report by Sky News, the ships were unable to steer and were sailing in the south Atlantic Ocean, west of Cape Town, South Africa.

According to the report, the officers onboard Willowy initially believed that the cause of their strange sailing was due to strong currents that were pushing the vessel around.
However, there were no such currents at the time. 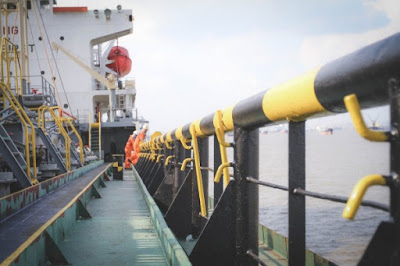 The next probable answer was that it might have been caused by a systemic GPS manipulation, which was created to undermine the tracking systems each commercial vessel must have under international law.
The technology is known as an automated identification system (AIS).
It broadcasts a unique identifier from each ship to another vessel nearby, including their GPS location, their speed, and where they are going.
The signals are also collected via satellites and are used to track down any suspicious behavior at sea.

According to Phil Diacon, the chief executive of marine intelligence company Dryad Global, the circles that happened in China were indeed attributed to GPS interference, and it has been happening outside of Chinese ports--going as far as San Francisco.
However, this was not the case with Willowy.
"GPS interference can have serious consequences, with half of all casualties at sea linked to navigational mistakes," Diacon said.
In addition, GPS interference attacking other vessels besides the AIS tracking system is incredibly rare, especially as they were far from the South China Sea, wherein the most common attacks have happened.
They are also far from the Straits of Hormuz, which would suggest it was not done by the Iranian Revolutionary Guard Corps that use GPS interference to dupe vessels into entering their waters.
With no strong currents and unlikely GPS interference, what's causing Willowy and four other vessels to sail in a circle?
Weakening Magnetic Field
Apparently, the European Space Agency (ESA) has the answer.
According to the report, the space agency found out that the magnetic field is getting weak in a large section between Africa and South America, and that this has been going on for 50 years now.
It even has a name and is called the "South Atlantic Anomaly."

The area with a weaker magnetic field has grown bigger and is moving westward, and in the last five years, the second center of minimum intensity has grown southwest of Africa, extremely close to where Willowy and four other vessels started sailing in circles.

Experts believe it is happening as the Earth is headed towards a pole reversal that would occur over a few centuries. [Now that would cause some major upset! ed
]
Certain vessels like Willowy use a gyrocompass alongside other systems.
A gyrocompass detects true north and allows the officers onboard to determine where they are headed and steer to it--if a gyrocompass were to fail, the vessel would start sailing in circles as the Willowy did.

Fortunately, the senior officers knew what happened, and according to the news outlet, the ship was able to resume its original course after switching to its secondary gyrocompass alongside a magnetic compass.
The company that owns Willowy explained the phenomenon as "an incidental breakdown" and that "repair will be done at the next port where the cause will be identified by shore technicians."
~~~~~~~~~~~~~~~~~~~

So..... what happened with the other three ships?? Are they still out there boring circular holes in the South Atlantic? South Atlantic Anomaly indeed! And let's hope the North and South poles don't reverse; think of the confusion it would cause, not to mention the animal migrations involved (certain animals - think Polar Bears and seals - don't live at the South Pole, only the North.)

Posted by Maritime Maunder at 8:58 AM