5 May 2020: Well, we're back, still locked down and a bit stir crazy but made the 1275 miles trip north without incident. And we thought you might enjoy an update on a post we did a month or so back on the trawler Ocean Pursuit which took the hard on the Outer Banks at Cape Hatteras North Carolina. And is still there! One of our readers kindly sent in some current pictures of how the trawler is faring - not well, as you will see - and the local newpaper, the News & Observer (NC edition) recently ran another piece on the problem. The photos are courtesy of Dick Anderson formerly of New Jersey and now living on the Outer Banks, North Carolina. Herewith, our update: 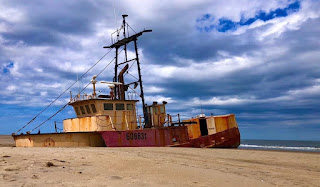 This is what the beached trawler Ocean Pursuit looked like a few weeks ago. 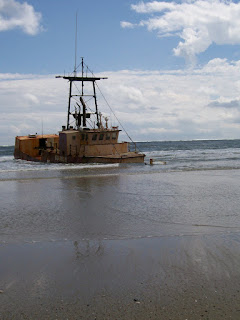 Dick Anderson writes:
"This is at low tide and even now the decks
are pretty much swamped.  The waves are beating the stern and giving her quite a pounding.  One fellow told me the first thing they did was pump out all the fuel and oil.  This same guy thinks the boat was just purchased and was being moved to Texas when it went aground.  Said they didn't have charts of the area and no knowledge of the inlets bars.

It appears the Ocean Pursuit is going to be a permanent fixture on the shoreline for quite a while.  I think re-floating it is out of the question and now its just gonna wait for the expected arrival of an acetylene torch."
***********

The folks at the News & Observer seem a bit less sanguine about the situation and more hopeful that the vessel will ultimately be removed. To wit:

"A shipwreck off North Carolina’s Outer Banks is doing something most people would think impossible: It’s sinking into dry earth.
This odd occurrence is playing out at Cape Hatteras National Seashore, where the 72-foot fishing vessel Ocean Pursuit ran aground on the morning of March. 1.
The boat was stuck 50 yards off Bodie Island: surrounded by a few feet of water at high tide, but on dry land much of the time.
Photographers were quickly drawn to the haunting site, and it was their photos posted on social media that first indicated the Ocean Pursuit appeared closer to shore and lower in the sand as time passed.
It’s been two months now, and the bow has vanished below the surface and sand is filling the cabins.
Is a boat actually sinking into the beach?
Yes, it is, and this kind of odd occurrence has been seen before on the Outer Banks, the National Park Service says.
“The vessel appears to be getting lower and lower in the beach because each tide brings in water which makes the sand soft and malleable. Thus the boat sinks into the sand a little each day. Northeast winds helped carry the vessel ashore,” Cape Hatteras spokesman Mike Barber told McClatchy News in an email.

North Carolina’s coast is known as “the Graveyard of the Atlantic” due to the more than 2,000 recorded shipwrecks in the area, according to OuterBanks.com. Treacherous currents and shifting shoals are often blamed, though some of the wrecks are German U-boats sunk in World War II.
“The warm waters of the northbound Gulf Stream meet the cold waters of the Arctic Current off Cape Hatteras at Diamond Shoals, and the entire coast is an area of shifting inlets, bays, and capes, representing a shipping hazard.”

Another of Dick Anderson's photos clearly shows this problem: 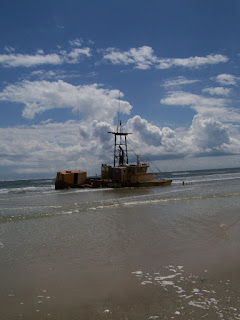 Ultimately, either the ship breakers will take care of the problem, or Mother Nature will. Should it be the latter, I am sure future storms will uncover and re-bury the wreck and passersby will revel in the discovery!

Until next time, stay safe


Posted by Maritime Maunder at 1:39 PM