20 May 2020: Well, here we are again; still "socially distancing" and wearing our masks, washing our hands, and generally trying not to breathe! But maybe there's a light at the end of the tunnel and we will get back to some form of "normal" before too long! I hope you all are safe, though being in "self quarantine" gives you more time to read Maritime Maunder! As a side note to that - we are now at 108,000 readers  all over the globe and still 3 months from our 6th anniversary! Very surprising and humbling. Thank you.

Today's post actually happened some 7 years back, but received little notice beyond some local news coverage. We think it's pretty interesting and fun. So, from the U.S. Navy Undersea Museum, the following:
~~~~~~~~~~~~


The Howell Torpedo, according to the United States Naval Undersea Museum, was one of the Navy’s first torpedoes. Thirteen feet long and 14.2 inches wide, the Howell carried a 100-pound guncotton charge. The torpedo, launched from surface ships, was powered by a unique system that used a steam powered turbine to wind up a flywheel to 10,000 RPM. The stored energy in the flywheel was enough to send the Howell a distance between 400 and 800 yards.

Of the 50 Howell torpedoes ever built, only two survived as display pieces. But in 2013, a U.S. Navy dolphin on a routine training mission in San Diego, California, discovered a third torpedo on the bottom of the ocean. The dolphin—officially a Mark 7 Marine Mammal System [really? not just a dolphin?:ed]—discovered the torpedo despite it being in pieces and largely buried in sea floor sediment.

Navy divers, acting on the Mark 7’s urging, investigated and discovered two pieces of a Howell torpedo. The torpedo featured an engraving on the nose cone that identified it as “No. 24.” The Underwater Archaeology Branch used the information to discover the identity of the torpedo:
(The branch) “conducted extensive archival research, leading to the discovery of a 20 December 1899 entry in USS Iowa's deck log that stated, "Lost H. Mark I, No. 24 torpedo...". USS Iowa had anchored off the coast of San Diego to conduct target practice. A practice warhead was used in training exercises, fastened onto the torpedo with only four pins and a screw. The practice head may have become detached from the torpedo body, which could explain why it was never recovered. 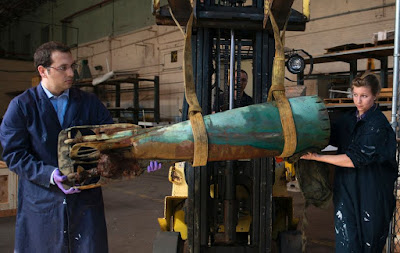 The torpedo pieces were shipped to the Naval History and Heritage Command’s Underwater Archaeology and Conservation Laboratory in Washington, D.C., to begin a lengthy preservation process. The pieces were immersed in a series of chemical baths to stabilize them. Next, 220 pounds of mineral buildup were painstakingly removed from the torpedo with pneumatic chisels and hand tools.
No. 24 is currently on temporary display at the U.S. Naval Undersea Museum along with a complete Howell torpedo.
~~~~~~~~~~~

Thanks to an alert Mark 7 Marine Mammal (I think I really prefer "dolphin") we have a very rare historical artifact on display at the Washington Navy Yard museum.

Our next post will be a follow up on a piece we did a month or so ago about Titanic... stay tuned and be safe.

Posted by Maritime Maunder at 8:19 AM