16 March 2020: Well, it looks as though the whole world is coming apart and unglued over the most recent outrage - the corona virus 19 - or "covid 19" as it is shortened. The press - internationally - is consumed with the potential of this flu-like malady and while the actual numbers, worldwide, are infinitesimal, the purveyors of universally bad news continue to frighten the population into lemming-like behavior. As a matter of actual fact, the percentage of the world wide population stricken with the Covid 19 flu is .00202% and the death rate has yet to move the needle. (I actually did the arithmetic) People are buying and hoarding any supplies they can get their hands on, including, of all things, toilet paper (apparently, excessive use of the toilet is NOT a symptom of the disease) but nonetheless, someone started it and the lemmings are following along. Whole cities are shutting down, people are confined to their homes, the worldwide economy has pretty much ground to a halt. What does the future hold? We have not a clue, but it is clearly not the end of the world. Hang in there folks! We'll get through this with the exercise of a bit of common sense.
So much for the editorial which, admittedly, has nothing to do with the maritime world, ships, the ocean, or anything we typically bring you. Sorry, but I had to vent. Now, on to today's news (maritime)!

From Histecho.com (an archeological on-line publication), the following:

A possible old Peruvian artifact was found by an undersea treasure hunter near Melbourne beach which could have been transported by the doomed 1715 Spanish Plate Fleet.
Mike Torres, chief technology officer at Seafarer Exploration, said. I found the item on Jan. 14 at the pre-dawn darkness. “I thought it was scrap. I thought it was a NASA scrap, honestly. I thought it was a piece of an aircraft,”
The circular copper relic has a picture of a bird-like figure and is about 10 inches in size, bordered with intricate patterns, John de Bry, director of the Center for Historical Archaeology in Melbourne Beach, said the object may have once been gold-plated. 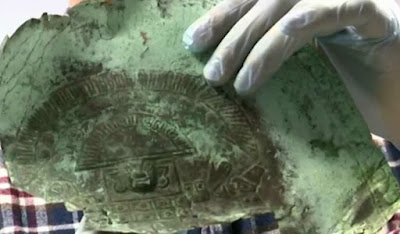 De Bry has studied the 1715 Plate Fleet — which takes its name from “Plata,” the Spanish word for silver — since the late 1960s. Eleven of the 12 ships in the fleet were lost in a hurricane on the coast of East Central Florida.
After examining the object Thursday at his home office, de Bry suspects it is the top portion of a headdress from a burial site dating to the Moche civilization, which flourished in Peru from about 100 to 700 A.D. — centuries before the Inca Empire.
“The close proximity of a 1715 shipwreck — especially one that might be the Concepción from Tierra Firme, South America — seems to explain the presence of this particular artifact,” de Bry said, peering through a magnifying glass at the metal artwork. 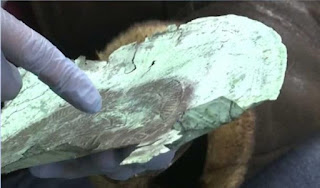 Seafarer Exploration is a Tampa-based company that explores, documents and recovers historic shipwrecks. Since 2014, the Florida Bureau of Archaeological Research has permitted the firm to search for artifacts in the Melbourne Beach area.

In 2004, divers discovered an iron cannon that may have belonged to the fleet off the Melbourne Beach shoreline. Subsequent expeditions yielded silver platters, a flintlock pistol, ship timbers, and other artifacts.

Torres called Jan. 14 to find the most significant in his company’s history.
He declined to divulge details about the shipwreck location. He also said he has no plans to sell the object and declined to speculate on its value: “How would you price that? I don’t know.”

Now that's much more interesting than getting the flu-like symptoms of Covid-19! Should more info appear on the ongoing exploration of the Concepcion's wreckage, we will try to bring it to you.
Until then, maintain your "social distance" and wash your hands - often!