WRECK OF GOLDEN RAY TO BE CUT UP

The Golden Ray then rolled over onto its port side, running aground in the ocean bed of the St. Simons Sound just south of the federal shipping channel that serves the port. Those in the know said this final resting place for the Golden Ray was no accident. They credit veteran Port of Brunswick Harbor Pilot Jonathan “T.J.” Tennant with intentionally guiding the ship toward a grounding outside of the port’s vital shipping lane.
While certainly a tourist attraction, she is also an obvious hazard to navigation and has to be removed. The question is how. CNN offers the following piece on that question and it's really quite amazing.
~~~~~~~~~~~~~~~~~~~~~~~~~~~~~~


If you live in Georgia near the Golden Ray, a 656-foot long cargo ship that has been on its side in St. Simons Sound for five months, get ready for some noise.


Apparently, a good bit of noise.


"There's no way to remove the Golden Ray without making noise -- there's no way around it," said Kevin Perry of Gallagher Marine Systems. "... We appreciate everyone's patience with the noise levels as we work to remove this wreck as quickly and safely as possible."


At a news conference Friday (7 Feb), he said the sounds will be like hammering you might hear from a construction site. 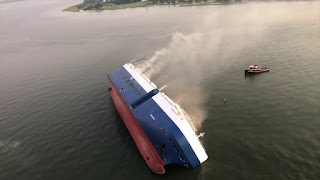 Officials hope to have the removal of the car carrier completed by the height of the Atlantic basin hurricane season, which begins June 1. The Golden Ray capsized September 8, and has been on its side and half submerged since.


The work to put up an environmental barrier will start the middle of this month and will only take place during the daylight, officials said. The final product will include a large floating boom to skim pollutants from the surface and netting to stop debris.


But then the ship, which still has more than 4,000 cars on it [now there's a deal for someone!- ed], will be cut into eight giant pieces with a giant diamond-cutting chain suspended from a lift vessel, officials said. 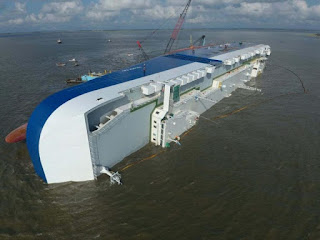 Once the sawing starts, it won't stop, and they think it will take 24 hours for each cut.


"That means noise through the night during some ... periods," said John Maddox, Georgia Department of Natural Resources on-scene coordinator.

The VB-10,000 vessel will be an interesting addition to the view from shore.


It comprises two metal towers, about 240 feet tall, each connected to a barge and to each other at the top. A crane will remove the sections after they have brackets attached to the side, the vessel will move, and the crane will put each section on a barge, which will take them to a recycling facility.

The sections will be wrapped to contain debris, T&T Salvage said in a presentation. Anything that falls to the sea floor will be picked up with magnets or grabs.
~~~~~~~~~~~~~~~~~

How's that for ingenuity! We will more than likely find more on this amazing recovery operation as the winter gives way to spring and will be sure to bring it to you.

Posted by Maritime Maunder at 1:47 PM