17 February 2020: These days, much of the "let's fix the world" talk/advice/"wisdom" deals with recycling and re-purposing. Surely, it's a great idea and one worth following when possible. The younger generation acts as if they discovered/invented it and yet, here is evidence that the ancient Egyptians were re-purposing and recycling routinely 3500 years ago. The following is from ABC News recently.
~~~~~~~~~~~


Rafi Bahalul found the artifact off the coast of Israel.

Rafi Bahalul was taking a morning swim off the shores of Atlit, Israel, when he spotted hieroglyphs in the seabed.

"I saw it, kept on swimming for a few meters, then realized what I had seen and dived down to touch it," Bahalul told Haaretz. "It was like entering an Egyptian temple at the bottom of the Mediterranean." 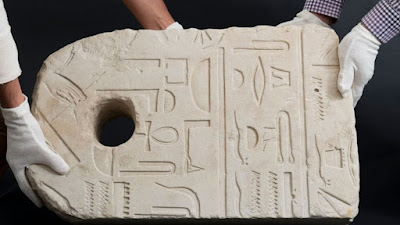 
The anchor is currently on loan from the Israel Antiquities Authority to the Israel Museum in Jerusalem and is on display as part of its Emoglyphs: Picture-Writing from Hieroglyphs to the Emoji exhibition.

Emoglyphs is the study of the transformation of picture writing from Egyptian hieroglyphs, developed some 5,000 years ago, to the 'emojis' of the 21st Century.

Shirly Ben Dor Evian, curator of Emoglyphs, said the stone would have initially been part of a larger, ornate wall relief. Repurposed as an anchor, it was cut from the relief and drilled with a hole to attach a rope. 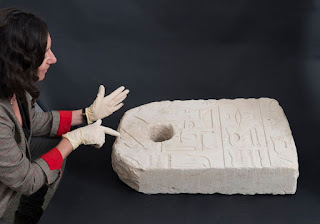 "The stone was discovered by chance -- spotted on the seabed by a swimmer," Ben Dor Evian told ABC News and said the relic is still being researched. "The Egyptian relief was reused as a stone anchor on a ship sailing the Mediterranean coast," she said.

Addressing the mystery of how the Egyptian relic was found off the coast of Israel, Ben Dor Evian proposed that it was separated from an Egyptian ship sailing the Mediterranean coast, perhaps lost in a shipwreck.

"The ship crew must have lost the anchor or the ship was shipwrecked," she said, adding that whether or not the anchor can contribute to a new understanding of ancient Egyptian life is "still under research."

The site where Bahalul made the chance discovery, just south of Haifa, was already known to archaeologists, according to the Jerusalem Post.
Depicted on the stone are the hands of Seshat, the Goddess of Writing, Ben Dor Evian said. An accompanying inscription reads, "mistress of the house of books."
~~~~~~~~~~~~~~~~~~~~~~~~~~~~~~~~~

I hope you didn't expect to see a picture of a traditional "old fashioned" anchor;

the ancients clearly had not yet got there, but a large rock wrapped in rope or, as in this case, a piece of stone originally used for something else would answer nicely as long as it was heavy enough. The "traditional" anchors evolved over thousands of years, going through wood (yes wood,though it was weighted with stone and later, lead) eventually to iron and then, around the 15th or 16th century, to the form we think of as an "old fashioned" anchor. Interestingly, anchors were relatively light because the windlass/winch had yet to come along and to augment the lightness, ships used as many as eight or ten anchors, depending on the conditions. Modern anchors i.e Danforth, CQR, plows etc did not come along until the 20th century.


Posted by Maritime Maunder at 9:19 AM