ARCHAEOLOGISTS MAY HAVE FOUND CORTES' ANCHOR

3 January 2020: Well, here we are again, and a most happy New Year to all of you out there who have been loyal readers over the years. We hope your year will be healthy, prosperous, and enjoyable. Maritime Maunder is now happily ensconced in winter quarters where it's at least warmer than up north. So all good on that front!

We are starting off the new year with a notice from Travel and Leisure Magazine which could be the start of further investigation into a 500 year old event.


Archaeologists May Have Found a Major Piece of Hernan Cortes' Ship Off the Gulf of Mexico
Anchors that may have belonged to the ships of Spanish conquistador Hernán Cortés were found in the Mexican Gulf Coast, Mexico’s National Institute of Anthropology and History (INAH) announced on Monday. 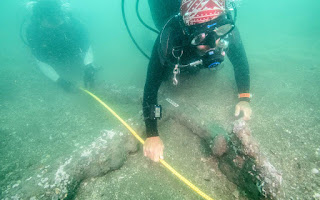 The anchors, which archaeologists believe date back 500 years, were found off the coast of Villa Rica, just north of the port city of Veracruz. The timeline would fit perfectly with that of Cortés as records show he landed in Veracruz in April 1519.

The anchors were buried beneath at least 30 feet of sediment — and archaeologists believe there may be more artifacts nearby, although it is not guaranteed that the anchors belonged to Cortes’s fleet as another explorer showed up in the same area just after. 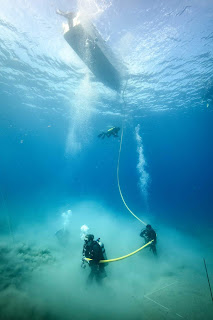 But it’s widely believed that Cortés sank his ships in that spot to stop dissident members of his army from defecting to Cuba.
“The Conquest of Mexico was a seminal event in human history, and these shipwrecks, if we can find them, will be symbols of the cultural collision that led to what is now the West, geopolitical and socially speaking,” marine archaeologist Frederick Hanselmann said in a statement.


Another anchor was found last year less than 1,000 feet away from the new discoveries. That anchor was determined to have been created between 1450 and 1530 from the wood of an oak tree that grows in northern Spain. Although neither of the most-recently found anchors contain wood, they’re made of a similar design. [after 500 years, it is unlikely that any wood could remain on the anchors -ed]
The anchors will be reburied in the sediment where they were found to preserve them. [would have been interesting to bring them up and preserve them for the public - ed]

This year (2019) marked the 500-year anniversary of Cortés’s invasion.
In honor of the milestone, Mexico's President Andres Manuel Lopez Obrador asked Spain to apologize to indigenous Mexicans for abuses committed during the conquest.

Should any more news of this discovery show up, we will try to bring it to you.
So, until next time, once again, happy new year and we wish you