18 January 2020: Wow! January's 3/4 done and we are still trying to catch up! So, with the northern part of the United States enjoying cold and snow and all the nasty stuff that accompanies January weather, we thought a look to the future i.e. this coming summer might be in order.


The 1979 Fastnet Race went into the history books as one of the deadliest offshore races ever when the unforecast storm whipped through the fleet, bringing huge seas, 75kts winds and disaster to many.

Since then, while there have been many  exciting Fastnet Races, none have rivaled the '79 horror. Last year, the race committee announced that the race (run in odd years) would finish in Cherbourg France instead of the traditional (since 1925) port of Plymouth, England. In response to this apparently unpopular modification, a new race has been announced. From British sailing magazine, Yachting World:

The event was created in reaction to the controversial announcement by the Royal Ocean Racing Club (RORC) last year that the two next Rolex Fastnet Races in 2021 and 2023 will finish in Cherbourg, a course it says was chosen to allow the event to accommodate larger numbers of competitors.

The Lonely Rock Race will start from Ryde on the Isle of Wight and go out to the Fastnet lighthouse off the south-west corner of Ireland before returning to a finish in Plymouth. It mirrors the traditional 600-mile course of the 95-year-old Fastnet Race and will also run every two years, but take place in the years between the RORC’s biennial Rolex Fastnet Race. 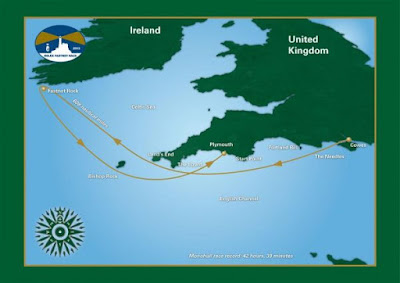 The first Lonely Rock Race will start this year on 16 August.
The RORC’s decision to move the finish port to France was highly controversial. Many previous competitors feel that it changes the DNA of this classic British offshore race, and the decision was met with dismay in Plymouth, where the race has traditionally finished on every edition since its founding in 1925.
The Royal Western YC’s event seeks to redress this by creating an alternative format that brings it back to the club’s home city. 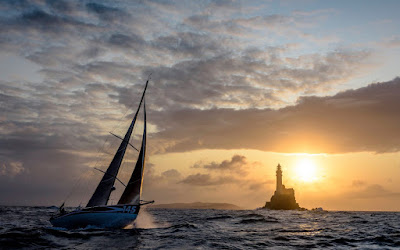 Plymouth has long been associated with major offshore and short-handed races. Beginning in 1960, the Royal Western ran the OSTAR solo transatlantic race and, from 1966, the once star-studded Two-Handed Round Britain & Ireland Races. It still runs the OSTAR for yachts up to 60ft, but sold the rights to the event for larger yachts such as IMOCA 60s and big multihulls. What became known as The Transat has since also been moved from Plymouth to France, and will begin from Brest in May.

Plymouth also lost out to a French bidder for the 2018 Golden Globe Race, after organisers said they did not have sufficient support from local council and businesses.

The club will have been eyeing the numbers attracted to the Rolex Fastnet Race which, in the last few editions, has sold out online in minutes. Organisers say they believe the Lonely Rock Race will be a sell-out too.  It is open to monohulls and multihulls between 30ft and 60ft. A Notice of Race is to be published shortly and more information is available from the RWYC.
~~~~~~~~~~~~~~~

So, now you offshore guys can race every year in a "Fastnet Race" - or every other year, and select whether you want to sail to France or stay in England. Being a traditionalist, we would prefer the new Lonely Rock Race, keeping the Fastnet experience a completely British undertaking.

See, we don't only write about shipwrecks and underwater adventures!

Posted by Maritime Maunder at 12:40 PM