17 November 2019: What? Another sunken submarine story? Yep, sorry about that, but a number of readers asked specifically for this story as it seems timely given that we just celebrated the end of the Great War (WWI)  Veterans Day here in the United States and, variously, Heroes Day, Memory Day, and other names elsewhere. And I promise, no more submarine stories for a while after this. Courtesy of Fox News and a host of other sources....
~~~~~~~~~~~~~~~


The wreck of the USS Grayback, a World War II submarine, has been found off the coast of Japan 75 years after its sinking by a Japanese bomber. Records indicate that the sub and its 80-member crew were sunk by a 500-pound bomb dropped in February 1944. 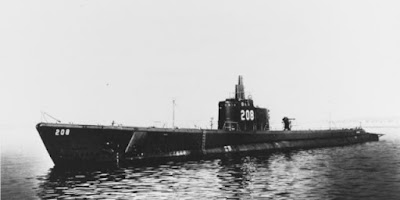 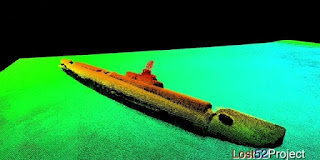 Japanese records indicate that the sub was sunk by a 500-pound bomb dropped by a naval bomber in February 1944. The bomb hit aft of the Grayback’s conning tower and the sub sank with the loss of her 80-strong crew.

The exploration team used an undersea drone to locate the Tambor-class sub, which lies at a depth of 1,427 feet, 50 nautical miles south of Okinawa. The sub’s deck gun was located 384 feet away

The USS Grayback was launched on Jan. 31, 1941, according to the Naval History and Heritage Command and quickly earned a fearsome reputation in the Pacific Theater. During 10 war patrols, it sank 14 enemy vessels, including Japanese submarines, totaling 63,835 tons of shipping. In January 1943, the sub’s crew also rescued six downed U.S. aviators from Munda in the Solomon Islands, for which her commanding officer was awarded the Navy Cross.

The wreck of the USS Grayback was found 50 nautical miles south of Okinawa. (Ocean Outreach/Lost 52 Project/YouTube) 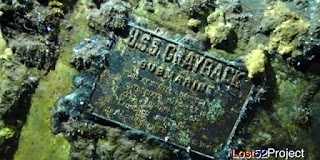 In the statement, Lost 52 Project founder Tim Taylor described the discovery as “absolutely amazing.” The research team, he explained, was analyzing some of the final pieces of the sonar data that they had collected when they spotted what proved to be the USS Grayback lying on the ocean floor.
Taylor is also the CEO of Tiburon Subsea, which provides underwater technology equipment and is also the founder of exploration organization, Ocean Outreach. 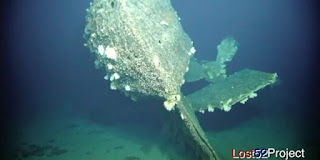 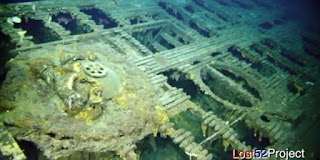 Japanese historian Hiroshi Iwasaki also played a crucial role in the discovery. The expert retranslated a primary record of the Grayback’s sinking and found that the longitude differed from a record created in 1946. Armed with the new coordinates, the Lost 52 Project was able to target the area where the wreck was subsequently found.

The USS Grayback is the fifth sub discovered by the Lost 52 Project. Earlier this year, the team located the bow of World War II submarine USS Grunion 77 years after the sub went missing off the remote Aleutian Islands in Alaska on her first war patrol.

The discovery provides closure for the families of the USS Grayback’s crew. “[Seventy-five] year old mystery solved and families of 80 Sailors have closure: USS Grayback has been found,” tweeted the Naval History and Heritage Command on Sunday.

Posted by Maritime Maunder at 10:12 AM