The world’s first combat submarine was something of an afterthought on the part of its creator. The revolutionary craft, known as the Turtle for its odd profile, was the progeny of David Bushnell, who was born in 1742 in West Saybrook, Conn. Bushnell did not start his career as an inventor, engineer, or even as a seafarer. In fact, he was a farmer for most of his early life. Bushnell’s father passed away when he was 29, and he eventually decided to sell the family farm. At the relatively advanced age of 31, Bushnell elected to pursue a higher education and entered nearby Yale College to study mathematics.
Bushnell graduated from Yale in 1775, on the eve of the American Revolution. He was a fervent patriot who felt strongly that technology would be the key to winning the war, so he and fellow inventor and Yale intellectual Phineas Pratt set to work. The powerful British Navy would have to be dealt with in order for the Revolution to be successful, and it was apparent that America’s fledgling navy would hard-pressed using conventional tactics. One of the pair’s first concepts was an underwater bomb with a time-delayed flintlock detonator, a forerunner of modern naval mines. The idea met with considerable skepticism as to whether gunpowder could be made to explode underwater, but Bushnell successfully proved that it could. The only dilemma facing the inventors was how to deliver the mines, or “time bombs,” to their intended target. For this purpose, Bushnell and Pratt developed a one-man, hand-propelled submersible vehicle to transport their bombs to an enemy vessel. The Turtle was born.
During the Turtle’s initial trials in the relative safety of the rivers of Connecticut, another famous colonial inventor, Ben Franklin, was an admired of the awkward-looking vessel, watching from shore as the Turtle was tested. Bushnell lacked the physical strength and stamina to operate the vessel himself, so his brother Ezra volunteered for the job. 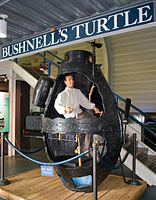 The Turtle bore almost no resemblance to the modern concept of a submarine. It looked more like a beer keg, with an oversized screw sticking out from the top, and its propellers and rudder oddly positioned on three different sides of the contraption. The hull of the vessel looked like two halves of a Turtle shell pressed together, hence its nickname. The Turtle was constructed of oak, covered with pine-tar pitch for waterproofing, and held together with iron bands. Measuring a mere 7 1/2 feet tall and six feet wide at its center, it was barely large enough for its single operator to squeeze inside. The operator entered through an airtight hatch on the top of the sub, sat on a traverse beam mounted inside the vessel, and drove the submersible with hand-cranked propellers, a large one in front and a smaller one on top. He steered by means of a rudder at the rear of the vessel.
The operator determined where he was going while on the surface by looking through a set of glass ports surrounding the hatch. Submerged, he made use of a compass lit by phosphorous. The Turtle could float on the surface and pump in fresh air through a leak-proof intake valve, but once under water the operator could only keep the vessel below until the air ran out. The ship dove and surfaced by means of brass pumps that took in or expelled seawater as ballast, as well as using 700 pounds of lead weights, increments of which could be played out on a 50-foot line and retracted as needed. A decidedly uncomfortable feature of the seawater ballast system was the fact that the Turtle had no true ballast tanks; the incoming seawater simply flooded the floor of the craft, leaving the operator knee-deep in water until it was eliminated with the pumps when it was time to surface.

Testing the Turtle
Once the Turtle made its way to its target, the job was only half finished—the operator then had to deliver the ordnance. The Turtle’s crank handle operated an external screw system whose controls were located in the vessel’s upper chamber. Attached to the screw was a waterproof fuse that led to the explosive charge. The charge, consisting of 150 pounds of black powder, was designed to be buoyant, and fastened to the outer hull of the enemy ship by means of a detachable screw device. Bushnell’s idea was for the operator to navigate under an enemy ship, drill the screw into the hull, detach the entire assembly while setting the fuse—a clockwork device with up to a 12-hour delay—and make his getaway. The mine would hopefully stay in place while the fuse burned down to the charge and exploded, leaving the enemy vessel with a hole blown in its hull. It was a lot to hope for—as it turned out, perhaps too much. 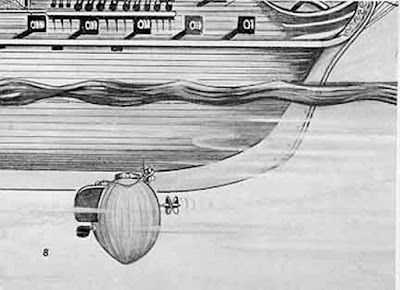 The combined British Army and Navy threatened to push Washington and his Continental Army up the Hudson River and gain control of the entire Hudson River Valley. This would effectively split the colonies in two, which was Howe’s grand strategy for bringing the Revolution to a sudden end. As his plan became apparent, it also became apparent that the Americans desperately needed to break up the British naval blockade. During this untenable situation, the Turtle was pressed into service for the first time, with the monumental task of breaking the blockade by attacking the British fleet as it lay at anchor.
After a year of training, Ezra Bushnell was ready to pilot the Turtle, but on the night before the mission he became seriously ill with a fever. The mission had to be scrubbed and a new pilot had to be trained in a considerably abbreviated time frame. Bushnell retreated with the Turtle back into Long Island Sound and quickly sought out a new volunteer. An army sergeant named Ezra Lee, of Old Lyme, Conn., was chosen to maneuver the submarine and deploy the mine. By then it was late August, and the situation facing the American forces had become even more serious. A large part of Washington’s army had been lured into a trap, and the British overran Long Island on August 26, brutalizing Washington’s troops and forcing them to retreat to New York City. Bushnell knew that time was running out. He cut short Lee’s training session and returned to New York.
With preparations tentative at best and Continental General Israel Putnam’s staff watching, the Turtle set out on its historic mission at 11 pm on the night of September 6, 1776, with scant hopes for success weighing heavily on the contraption, its inventor, and its pilot. After several grueling hours of cranking, Lee and the Turtle finally reached the HMS Eagle, Howe’s flagship, which was anchored in the approximate present-day location of the Statue of Liberty. Before dawn, Lee managed to submerge beneath the ship’s keel undetected. Bushnell and his team knew that attaching the mine would be a difficult task under any circumstances. British naval ships of the period protected their hulls with a process called “graving,” smearing the hull with a thick compound of tallow, sulfur and resin. This process repelled wood-boring shipworms, barnacles, and other destructive sea creatures, but did not prevent weeds from growing up through the hull or other undesirable growths from attaching to it. Unfortunately for Bushnell and his team, the British had discovered that “coppering,” sheathing the hull in thick copper plate, protected their ships from all forms of seaborne menaces. Most of the fleet was undergoing coppering during the Revolutionary War, and surely the admiral’s flagship would have been one of the first to receive such an improvement. This unhappy development most likely accounts for Lee’s inability to attach the mine to the Eagle. He made two arduous attempts, but struck metal both times and failed to penetrate the hull with the hand-driven screw. Exhausted, unable to attach the exploBy now it was nearing daylight, and on his return to New York, Lee was discovered by the British as he passed near Governor’s Island. They pursued him, and in an effort to hasten his escape he detached the mine, the fuse of which was still burning. Fearing a rebel trick, the British sailors rowed frantically back to shore. Lee was eventually spotted by his men waiting on shore and was hastily rescued, but the freed mine continued on its rogue mission. It was set to go off after one hour and, according to a witness, “drifted past Governors Island into the East River where it exploded with great violence, throwing large columns of water and pieces of wood high in the air.” Putnam, thinking Lee had succeeded in his mission, shouted for joy, but the mine had done no actual physical damage to the enemy. Thus ended the maiden voyage of the world’s first submarine. Due to running out of breathable air, Lee had no choice but to abandon his mission. 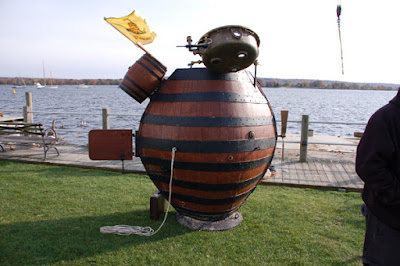 And there you have it! The first ever submarine! Now a staple and mainstay of almost every navy in the world!
Until next time,
Fair Winds,
Old Salt

Posted by Maritime Maunder at 11:39 AM