2 May 2019: From America's Cup challenges (and disappointments) to undersea archeology in one week! Kinda takes one's breath away! We don't want you to think we get stuck on one topic here at Maritime Maunder. Just trying to keep it interesting for everyone! So this week's post comes from the Guardian, a well respected British journal.
~~~~~~~~~~~~~~~~~~~


The Spanish culture ministry has begun an inventory of shipwrecks in the Americas, identifying 681 vessels that sank between 1492 and 1898


Over the following four centuries, as Spain’s maritime empire swelled, peaked and collapsed, the waves on which it was built devoured hundreds of ships and thousands of people, swallowing gold, silver and emeralds and scattering spices, mercury and cochineal to the currents.
Today, three researchers working for the Spanish culture ministry have finished the initial phase of a project to catalogue the wrecks of the ships that forged and maintained the empire.
Led by an archaeologist, Carlos León, the team has logged 681 shipwrecks off Cuba, Panama, the Dominican Republic, Haiti, Bermuda, the Bahamas and the US Atlantic coast.
Its inventory runs from the sinking of the Santa María to July 1898, when the Spanish destroyer Plutón was hit by a US boat off Cuba, heralding the end of the Spanish-American war and the twilight of Spain’s imperial age.
After spending five years scouring archives in Seville and Madrid, León, his fellow archaeologist Beatriz Domingo and the naval historian Genoveva Enríquez have put together a list aimed at safeguarding the future and shedding light on the past.
“We had two fundamental objectives,” says León. “One was to come up with a tool that can be used for identifying and protecting
The treacherous waters of the Americas had their first taste of Spanish timber on Christmas Day 1492, when Christopher Columbus’ flagship, the Santa María, sank off the coast of what is now Haiti. 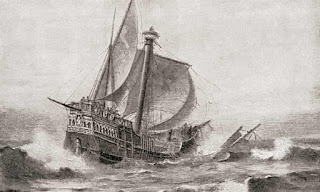 “The other was to recover a bit of history that’s been very much forgotten. The most famous ships have been investigated, but there’s a huge number about which we know absolutely nothing. We don’t know how they sank, or how deep.”
The information gathered would help the team to find out what navigation was like at the time, he said.
The team’s research will thrill historians and cartographers, but is unlikely to delight those who harbour romantic notions about doubloons, parrots and Jolly Rogers.
It found that 91.2% of ships were sunk by severe weather – mainly tropical storms and hurricanes – 4.3% ran on to reefs or had other navigational problems, and 1.4% were lost to naval engagements with British, Dutch or US ships. A mere 0.8% were sunk in pirate attacks.
Archaeologists have located the remains of fewer than a quarter of the 681 vessels on the inventory to date.

León, Domingo and Enríquez were surprised to come across 12 areas with particularly high concentrations of wrecks in Panama, the Dominican Republic and the Florida Keys. Instead of the expected two or three wrecks per bay, they discovered as many as 18.
“Some of these areas, like Damas bay in Panama, are very open,” says León. “There were huge annual trade festivals there from the 16th century to the mid-17th and that attracted a massive amount of maritime traffic. It’s not a very protected area and so when a storm came in, the ships sank.”
Or, to put it in more modern terms: “It was like a motorway. It’s not very deep there, either. And ships are a bit like aeroplanes. They usually go down on take-off or landing.”
Treasure hunters tend to be more interested in ships that came to grief on their way back from the Americas, but León and his colleagues say the ill-fated outward-bound vessels are just as compelling.
“The cargo they carried speaks of a massive amount of trade,” says the archaeologist. “But it’s not just about products and trade. These ships were also carrying ideas. We were surprised to find a lot of boats loaded with religious objects – relics, decorations and even stones to build churches.”
Their findings, however, go beyond cutlasses and crucifixes, and help to explain how Spain succeeded in enriching itself for centuries.

As well as the “tonnes and tonnes” of mercury sent to the new world to be used in extracting gold and silver from the mines that fed the empire, “we found boats that were carrying clothes for slaves”. Others carried weapons to be used in putting down local rebellions.
The researchers now plan to transfer the paper inventory to a database that the Spanish government can share with countries with colonial shipwrecks in their waters. León hopes the information his team has gathered will give those countries what they need to safeguard their maritime heritage against unscrupulous treasure hunters who all too often use salvage permits as a cover for more profitable explorations. 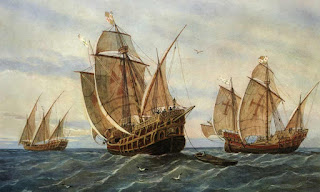 “We have to be very careful about the details and positions of some of the ships,” he says. “But the ministry works with countries that have ratified the 2001 Unesco convention [on the protection of the underwater cultural heritage], so they should be countries that aren’t going to use this information to make deals with treasure-hunting firms.”
Anyway, he adds, the big treasure-hunting outfits will not be interested in most of the wrecks on the inventory. “It’s true that the big treasure-hunting firms have spent years doing what we’ve been doing, but only when it comes to the ships that carried huge treasure loads. I don’t think we’d be helping them out much, to be honest.”
The three researchers are now preparing for another deep dive, into the archives and libraries. The Spanish empire was, after all, a very, very large one. “We’ve still got many more areas to go,” says León. “Next year, I’d like to work on Mexico, Colombia, Puerto Rico and Costa Rica so as to kind of finish up the Caribbean area. After that’s it’s on to the Pacific.”
~~~~~~~~~~~~~~~~~~~

Should information surface (pun intended!) about their finds - without, of course, locations - we will make it available to our readers..